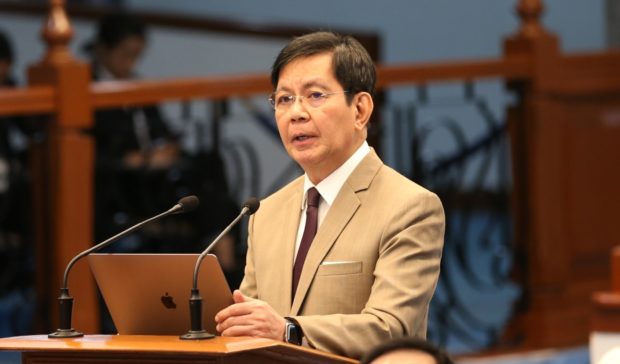 “Better late than never,” Lacson said of the order in a text message to the Inquirer.

“There is nothing to be ashamed of in admitting mistakes, no matter how subtle its rectification is done,” the senator said. “I hope this ends well for the good of the entire nation.”

Mr. Duterte last week put Washington on notice that he would terminate the VFA unless the United States “corrected” the visa cancellation of former police Chief Ronald “Bato” dela Rosa, now a senator.

Justice Secretary Menardo Guevarra, who previously said he would present on Monday the legal steps needed to abrogate the treaty, instead disclosed Malacañang’s directive to closely study the effect of ending the 20-year-old military treaty, an apparent softening of Mr. Duterte’s previous stance.

Lacson, chair of the Senate defense and security committee, said the Palace may have figured out that the President’s “knee-jerk reaction due to some petty and personal reasons might have some dire implications on the country’s national interest.”

The senator said Malacañang should observe “complete staff work,” a guideline often implemented in the military service, before arriving at a decision on sensitive bilateral agreements with other countries.

Sen. Christopher “Bong” Go, the President’s trusted aide, said Mr. Duterte “just wants to see all the recommendations [of pertinent agencies] first before making his decision on [the matter].”

The President was merely “concerned” over the visa cancellation of one of its senators and did not consider Dela Rosa’s visa problem a “special case” that needed explanation from Washington, presidential spokesperson Salvador Panelo said.

“When we banned the [three US] senators, we stated the reasons why. Now the [US is] also banning a senator, it’s the same,” Panelo said in a press briefing on Tuesday, referring to Mr. Duterte’s directive on the US senators who proposed an entry ban on Filipino officials involved in the arrest and detention of Sen. Leila de Lima.

Told that the United States had also reportedly canceled the visa of other officials in previous administrations, Panelo said “those governments were not concerned. This administration is concerned about all our citizens.”

In May last year, Malacañang said it was keeping its hands off the controversy involving former Ombudsman Conchita Carpio Morales, who was denied entry in Hong Kong because of unspecified “immigration reasons.”

Malacañang was similarly dismissive of the case of former Foreign Secretary Albert del Rosario, who was also barred from Hong Kong in June last year, with Panelo saying that one cannot question the right of a country to stop any visitor wanting to enter that particular country.

“That’s their exclusive domain,” he said. “That’s absolute authority for a particular country to deny entry to their country.”