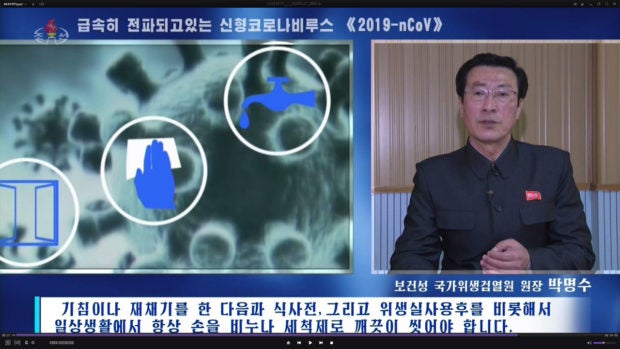 SEOUL — North Korea is on high alert to contain the spread of the Wuhan coronavirus and stepping up quarantine efforts, as the deadly respiratory virus that originated in China continues to reach Asia and across the world.

Pyongyang’s official newspaper, the Rodong Sinmun on Tuesday said the government has taken emergency measures to prevent the circulation of the virus in the country, which shares a border with China. The newly identified respiratory virus has killed over 100 people as of Tuesday in mainland China, and affected more than 2,700 people around the world since it first emerged in Wuhan in December.

North Korea, however, has yet to report a confirmed case of its own.

According to the report, health authorities have been dispatched to all regions across North Korea to promote public hygiene, while the government has stepped up quarantine efforts at borders, ports and airports for “the virus to not enter the country.” Health authorities have been medically monitoring those who traveled abroad. It also prepared a system to isolate patients, in the event that suspected case to appear.

The doctors are visiting patients with fever and suffering pneumonia under their jurisdiction to check the possibility of the coronavirus diagnosis, it added. North Korea is also putting all-out efforts to expand production of antiviral drugs.

“With the devoted efforts by the health personnel, we are setting up a thorough quarantine measures for this new coronavirus to never enter the country,” it reported.

The paper also reported on the number of confirmed cases and death toll of the global outbreak. It reported that South Korea had confirmed an additional case, along with Canada and Russia.

Following the outbreak, North Korea has temporarily closed its borders to all foreign tourists, as most its tourists are Chinese or have traveled via China.

“We are aware that the land and air transportation have been blocked between China and North Korea,” said an official at the Unification Ministry on condition of anonymity.

Pyongyang on Tuesday requested South Korean officials working at their joint liaison office in Kaesong to wear masks, according to the ministry. Seoul’s health officials began checking the temperature of workers heading to the North. Previously, authorities just checked their temperatures when the workers returned to the South. It is also providing workers with masks and hand sanitizer.

“As for now, the chances for Wuhan coronavirus to spread from the human to human interaction between the two Koreas seem low,” a ministry official said. “But we will keep monitoring our situation as well as the North.”