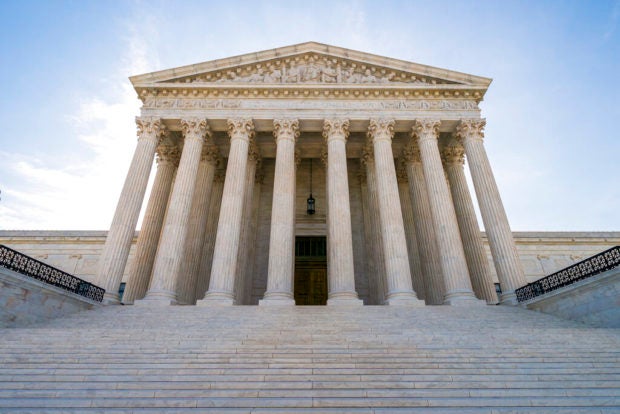 File photo of the US Supreme Court in Washington. A divided Supreme Court is allowing the Trump administration to put in place a policy connecting the use of public benefits with whether immigrants could become permanent residents. AP

WASHINGTON — A divided Supreme Court on Monday allowed the Trump administration to put in place new rules that could jeopardize permanent resident status for immigrants who use food stamps, Medicaid and housing vouchers.

Under the new policy, immigration officials can deny green cards to legal immigrants over their use of public benefits.

The justices’ order came by a 5-4 vote and reversed a ruling from the 2nd U.S. Circuit Court of Appeals in New York that had kept in place a nationwide hold on the policy following lawsuits against it.

Federal appeals courts in San Francisco and Richmond, Virginia, had previously overturned trial court rulings against the rules. An injunction in Illinois remains in effect but applies only to that state.

The lawsuits will continue, but immigrants applying for permanent residency must now show they wouldn’t be public charges, or burdens to the country.

The new policy significantly expands what factors would be considered to make that determination, and if it is decided that immigrants could potentially become public charges later, that legal residency could be denied. Under the old rules, people who used non-cash benefits, including food stamps and Medicaid, were not considered public charges.

“The public charge rule is the latest attack in the Trump administration’s war on immigrants,” said Stephen Yale-Loehr, an immigration expert at Cornell University’s law school. “It makes it harder for working class people to immigrate to or stay in the United States. This rule is another brick in the invisible wall this administration is building to curb legal immigration.”

Roughly 544,000 people apply for green cards annually. According to the government, 382,000 are in categories that would make them subject to the new review.

Immigrants make up a small portion of those getting public benefits, since many are ineligible to receive them because of their immigration status.

In a separate opinion, Justice Neil Gorsuch urged his colleagues to confront the “real problem” of so-called nationwide injunctions, orders issued by a single judge that apply everywhere. In this case, even though the administration won rulings in two appellate courts covering 14 states, its policy could not take effect.

“What in this gamesmanship and chaos can we be proud of?” Gorsuch wrote in an opinion joined by Justice Clarence Thomas.

Ken Cuccinelli, the acting deputy secretary of Homeland Security, praised the high court’s order. “It is very clear that the U.S. Supreme Court is fed up with these national injunctions by judges who are trying to impose their policy preferences instead of enforcing the law,” Cuccinelli said.

Susan Welber, a Legal Aid Society lawyer who is among the attorneys for the plaintiffs, said she believes courts ultimately will invalidate the policy. “What’s sad is that the harm that’s done while the rule is in effect can’t be undone,” Welber said.