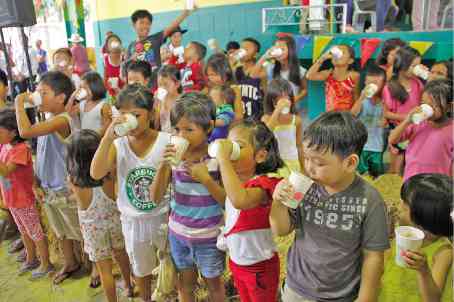 MANILA, Philippines — The Department of Agriculture (DA) on Tuesday said it will boost its efforts on dairy production following the observations of Senator Cynthia Villar, where she said that lack of affordable milk was partly to blame for the poor academic performance of Filipino children.

“We acknowledge the observation of Senator Cynthia Villar on the real situation of the country’s dairy industry, particularly the measly supply of locally-produced milk,” the DA said in a statement.

“We appreciate her passion for our local dairy industry to produce the needed milk to feed our children,” the DA added.

To boost dairy supply, the DA said it will “elevate the game” by “geometrically increasing the population of dairy cattle and upgraded carabaos, that could produce at least 12 to 15 liters per day.”

On the Senate hearing on agriculture held Monday, Villar, who also chairs the committee, railed against DA officials and the National Dairy Authority (NDA), saying that they were also to blame for the Philippines’ low ranking in the Programme International Student Assessment 2018 of the Organization for Economic Cooperation and Development.

According to Villar, while the Philippine Carabao Center (PCC) and NDA have been in existence for 26 years, the country’s dairy production is only at one percent while the other 99 percent of the demand were all imported.

The DA further said it will “overhaul” the programs, as well as the respective targets, of the NDA and the PCC.

The DA added that the PCC and NDA will also “massively improve” the genetics of dairy buffaloes and cattle to produce seven liters and 18 liters of milk, respectively.

“We will seek increased budget from Congress to launch a revitalized dairy industry roadmap up to 2022, that will serve as a foundation to adequately meet the annual per capita milk consumption of 22 kilograms,” the DA added.

And while the DA said that the country’s dairy sector produced 23.69 million liters of milk and has registered annual growth equivalent to 5.4 percent, it added that this “wasn’t enough.”

“In all, we will harmonize and strengthen the plans and programs of the  PCC and NDA, inputting innovative and new strategies to once and for all develop the Philippine dairy industry,” the DA said.

The department also cited Republic Act 11037 or the “Masustansyang Pagkain Para Sa Batang Pilipino Act”—where the law provides a school-based feeding program including  milk-feeding— as their guide to “perform better.

“Further, we will provide a conducive environment for the private sector and local government units to invest in our national dairy industry, and join hands to complement and enhance our efforts to at least double local milk production in the next five years,” the DA said.