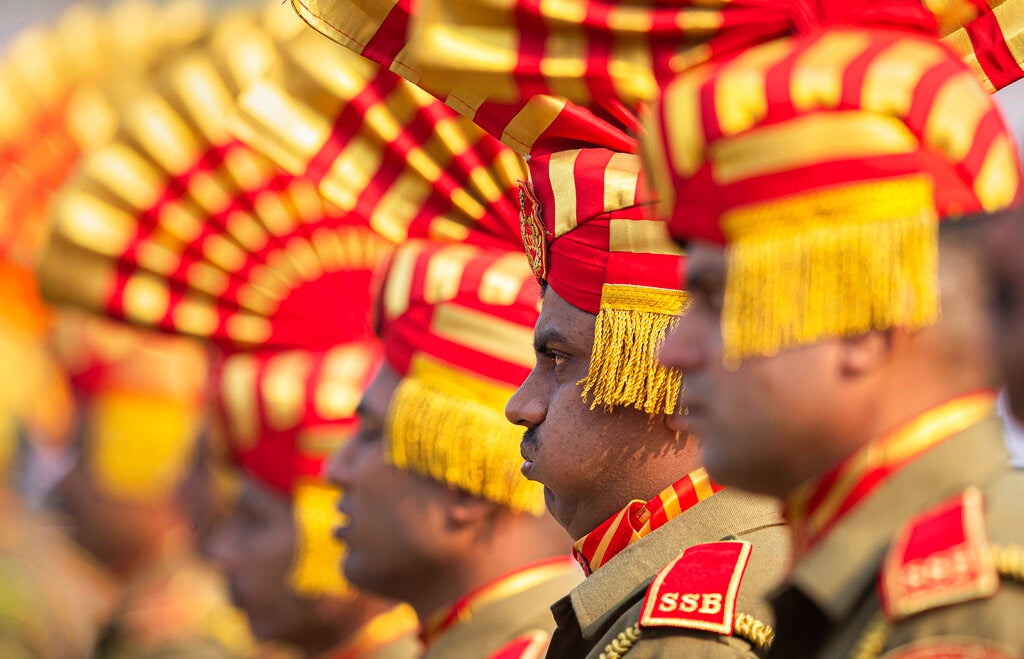 An Indian Sashastra Seema Bal paramilitary soldier breathes through mouth as he participates in a parade to mark Republic Day in Gauhati, India on Sunday. (AP)

NEW DELHI — Thousands of Indians converged on a ceremonial boulevard in the capital amid tight security to celebrate the Republic Day on Sunday, which marks the 1950 anniversary of the country’s democratic constitution.

During the celebrations, schoolchildren, folk dancers, and police and military battalions marched through New Delhi’s parade route, followed by a military hardware display.

The 90-minute event, broadcast live, was watched by millions of Indians on their television sets across the country.

Brazilian President Jair Messias Bolsonaro was the chief guest for this year’s celebrations.

He was accorded the ceremonial Guard of Honor by President Ram Nath Kovind and Prime Minister Narendra Modi at Rashtrapati Bhawan, the sprawling presidential palace.

Bolsonaro joined the two Indian leaders as the military parade marched through a central avenue near the Presidential Palace.

At the parade, Bolsonaro watched keenly as mechanized columns of Indian tanks, rocket launchers, locally made nuclear-capable missile systems and other hardware rolled down the parade route and air force jets sped by overhead.

Apart from attending the Republic Day celebrations, Bolsonaro’s visit was also aimed at strengthening trade and investment ties across a range of fields between the two countries.

On Saturday, Modi and Bolsonaro reached an agreement to promote investment in each other’s country.

Before the parade, Modi paid homage to fallen soldiers at the newly built National War Memorial in New Delhi as the national capital was put under tight security cover.

Smaller parades were also held in the state capitals.

Police said five grenades were lobbed in the eastern Assam state by separatist militants who have routinely boycotted the Republic Day celebrations. No one was injured, police said.

Sunday’s blasts also come at a time when Assam has been witnessing continuous protests against the new citizenship law that have spread to many Indian states.

The law approved in December provides a fast-track to naturalization for persecuted religious minorities from some neighboring Islamic countries, but excludes Muslims.

Nationwide protests have brought tens of thousands of people from different faiths and backgrounds together, in part because the law is seen by critics as part of a larger threat to the secular fabric of Indian society.