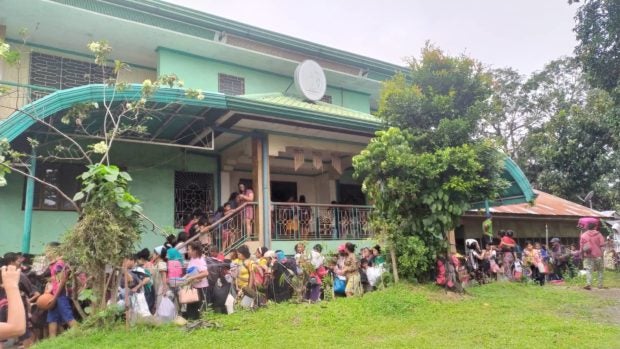 SHELTER UNDER SIEGE “Lumad” (indigenous peoples) evacuees converge at the United Church of Christ in the Philippines main building after an alleged attack by a paramilitary group. PHOTO COURTESY OF KILAB MULTIMEDIA

DAVAO CITY — Vice Mayor Sebastian “Baste” Duterte temporarily dissipated the tension that developed on Saturday at the United Church of Christ in the Philippines’ (UCCP) Haran compound here, when bolo-wielding men forced their way into the compound housing evacuees from the “lumad” (indigenous peoples, or IP) community, tearing down its walls and prompting the evacuees to run and take shelter at the main building.

Duterte, who entered the compound already sealed by the police at 2 p.m. on Saturday, said lumad leaders had agreed to sit down and talk to iron out their differences.

‘Talk to each other’

“Lumad leaders had already agreed to talk to each other,” the Davao City vice mayor said after about an hour inside the compound, which was declared off-limits to the media.

He said he had agreed to arrange a meeting to be joined by Davao del Norte Gov. Edwin Jubahib and Davao City Mayor Sara “Inday” Duterte, his sister.

“They have agreed to schedule a meeting with the [Davao del Norte] governor and the [Davao City] mayor. What’s important was they already agreed to talk about the RPOC (Regional Peace and Order Council) [resolution]. I thank God that everything has been ironed out without the loss of lives,” he said.

Jubahib had set in motion a resolution adopted by the RPOC on Jan. 15 to close down UCCP Haran, which the military accused of violating IP rights and committing child abuse and child trafficking while housing the evacuees.

Lumad evacuees claimed, on the other hand, that they took shelter at the UCCP Haran because they were under threat in their communities.

In a statement, human rights advocacy group Karapatan described Saturday’s incident at the UCCP Haran as an “attack [by] paramilitary group Alamara on the more than 500 lumad evacuees, including at least 236 children and infants.”

According to the group, “around 50 men including members of paramilitary group Alamara and suspected state agents in plainclothes have torn down the walls of the UCCP Haran compound in Davao City. The perpetrators also brought wire cutters and surrounded the compound, carrying placards with texts vilifying the UCCP.”

Some members of the paramilitary group entered the compound, while the lumad evacuees went to the UCCP office building to take refuge. The rights group likewise noted that police present in the UCCP compound were complicit to the attack, refusing to apprehend members of the Alamara.

In the initial talks with the vice mayor on Saturday, at least five lumad leaders had agreed on further negotiations.

They included the former lumad fugitive Datu Guibang Apoga, the reputed Talaingod lumad leader who had waged a tribal war to defend their ancestral land; and Datu Tungig Mansomuy-at, secretary general of the lumad school Salugpongan, which had been shut down by the government. Mansomuy-at was among the lumad leaders who took refuge at Haran because of threats to their lives.

Jubahib’s resolution regarded the move to close down Haran as part of an effort to “rescue” the evacuees.

But Lumad leaders like Datu Mentroso Malibato, vice chair of Pasaka and an evacuee from Kapalong town in Davao del Norte, said they sought refuge at the UCCP Haran because they felt they were being targeted in their communities for their opposition to militarization and the entry of big corporations on their ancestral land.

“We were forced to seek re­fuge at UCCP Haran while we continue to demand the government to put a stop to the ongoing militarization and the deployment of Alamara [paramilitary group] in our communities,” Malibato earlier said. INQ

Read Next
2 Comelec commissioners to retire in February
EDITORS' PICK
Vietnam’s ‘crazy guy’ aims to save ocean from waste
Acer starts the year off strong with the Aspire Vero National Geographic Edition
Gear up and get ready to play with Yamaha Mio Gear
COVID-19 infection of 22,958 more boosts PH’s tally to nearly 3.3 million
Over 3 Million worth of prizes to be won at Smart Padala’s SENDali Manalo Promo!
WHO says no evidence healthy children, adolescents need COVID-19 boosters
MOST READ
‘Sampal sa gobyerno:’ Drilon wants unvaxxed PAO chief barred from working
Vice mayor slams Vico Sotto for turning Pasig into a ‘puro palabas’ city
Guevarra to Acosta: Obey rules on unvaccinated
Guanzon denies Comelec delaying resolution of cases vs Marcos Jr. to favor any party
Don't miss out on the latest news and information.