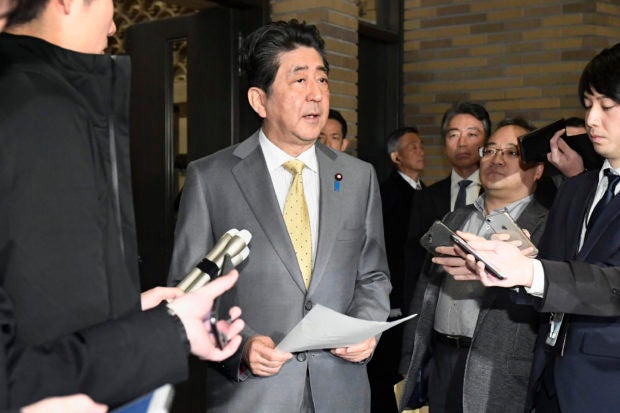 Japanese Prime Minister Shinzo Abe, center, speaks to reporters at his official residence in Tokyo Sunday, Jan. 26, 2020. Abe said he is making arrangements to fly Japanese people home from the Chinese city of Wuhan, hit by an outbreak of a new virus recently. (Mizuki Ikari/Kyodo News via AP)

TOKYO — Japanese Prime Minister Shinzo Abe said Sunday that he is making arrangements to fly Japanese people home from the Chinese city of Wuhan, the epicenter of an outbreak of a new viral illness that has killed dozens.

Abe told reporters that Japanese who wish to be evacuated will be flown out on a chartered flight. He said he is in talks with China on the plan, and Japanese officials had been working on such preparations through the weekend.

“I have decided to have all those who wish to do so to come home,” Abe said, stressing that various options had been studied in recent days.

The new virus has been linked with 56 deaths so far in China.

The U.S. Consulate in Wuhan announced Sunday that it will evacuate its personnel and some private citizens aboard a charter flight.

The French Consulate also was considering the evacuation of its nationals from the city. It said it’s working on arranging a bus service to help French citizens leave Wuhan.

Government officials have said they have found three cases of the new virus in Japan.

Travel to China has dropped. Toyota Motor Corp. has halted business trips to Hubei province, including Wuhan. Japanese media reports have said that several hundred Japanese people are believed to be living in the area.