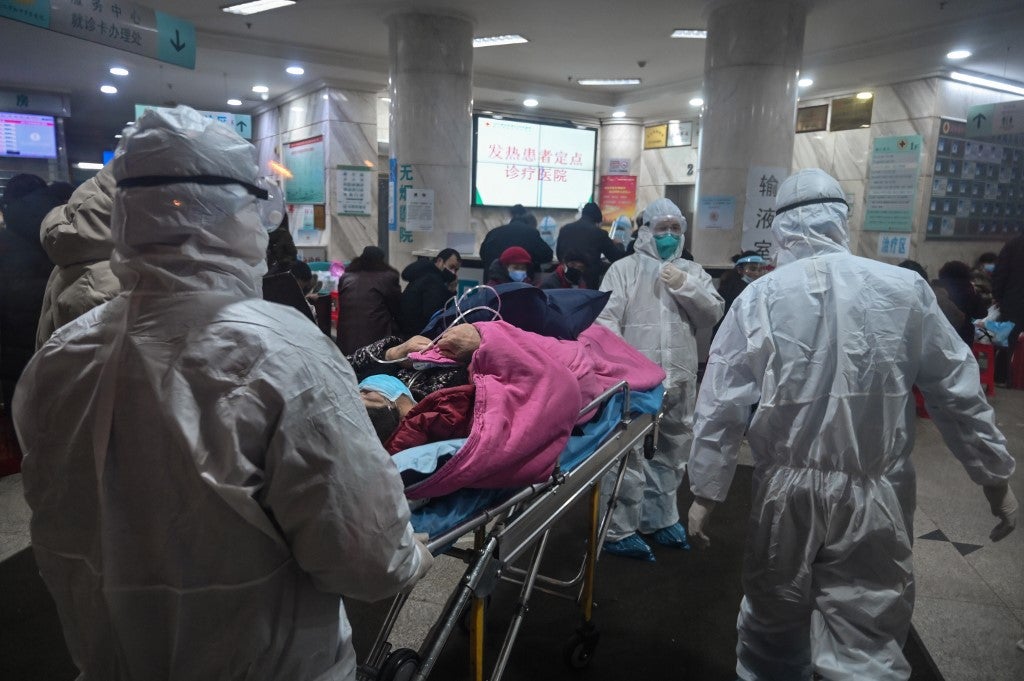 In this photo taken on January 25, 2020, medical staff wearing protective clothing to protect against a previously unknown coronavirus arrive with a patient at the Wuhan Red Cross Hospital in Wuhan. (Photo by Hector RETAMAL / AFP)

BEIJING, China — A virus similar to the SARS pathogen has claimed 56 lives since emerging in a market in the central Chinese city of Wuhan, and spread around the world.

Here are the places that have confirmed cases of the 2019 Novel Coronavirus:

As of Saturday, almost 2,000 people have been infected across China, the bulk of them in and around Wuhan.

Nearly all of those who died were in the Wuhan region, but officials have confirmed at least four deaths elsewhere.

The city of Macau, a gambling hub hugely popular with mainland tourists, has confirmed five cases as of Sunday.

In Hong Kong, five people are known to have the disease. Three of those cases were confirmed in the 24 hours to Saturday morning.

There are three known cases of the coronavirus in France, the first European country to be affected by the outbreak.

One person is sick in Bordeaux and another is ill in Paris. A third person, who is a close relative of one of the other two, has also been confirmed to have the virus.

All three had recently travelled to China and have now been placed in isolation.

One man was hospitalised on January 10, four days after his return from a visit to Wuhan.

Two people from the Chinese city — a man in his 40s and a woman in her 30s — have been treated in hospital for fever.

Australia confirmed its first four cases of the virus on Saturday.

One man in Melbourne and three men in Sydney tested positive and are being treated in hospital isolation units after arriving in the country from Wuhan.

Authorities said they were contacting people who had travelled on the same planes from China and are offering advice.

The US has confirmed two cases of the virus in patients who had recently entered the country from Wuhan.

A man aged in his 30s reported himself to authorities on January 19 after returning to his home near Seattle. On Friday, public health authorities said the virus had been detected in a Chicago woman in her 60s.

Both patients were quarantined in hospital and had responded to treatment, health officials said.

Canada said Saturday it had identified its first “presumptive” case of the virus in a man who returned to Toronto from Wuhan.

The patient is aged in his 50s and has been placed in isolation.

Malaysia confirmed its fourth case on Sunday. All are Chinese nationals on holiday from Wuhan who arrived in the country from Singapore.

A 66-year-old woman and two boys, aged two and 11, are in a stable condition and are being kept in an isolation ward at a public hospital, Malaysia’s health minister said Saturday.

The latest case a 40-year-old man who entered the country on a bus with a Chinese tour group.

Nepal said a 32-year-old man arriving from Wuhan had the disease.

The patient, who was initially quarantined, recovered and was discharged. The government said that surveillance has been increased at the airport “and suspicious patients entering Nepal are being monitored”.

Singapore announced its fourth case of coronavirus on Sunday. All four patients had arrived in the city-state from Wuhan over the last week.

The latest confirmed case is a 36-year-old man who entered Singapore on Wednesday and later developed a cough, the health ministry said in a statement.

The patients include two South Korean men, both aged in their 50s and working in Wuhan, who returned to South Korea earlier this week.

The country reported its first case on January 20 — a 35-year-old woman who flew in from Wuhan.

Taiwan has uncovered three cases so far. It has since advised against travel to Wuhan and Hubei province and on Friday said any arrivals from Wuhan would be rejected by immigration.

All arrivals from the rest of China — including Hong Kong and Macau — must fill out health declaration forms on arrival.

It has also banned the export of face masks for a month to ensure domestic supplies.

Thailand has detected five cases so far — four Chinese nationals from Wuhan and a 73-year-old Thai woman who came back from the Chinese city this month.

Two of the Chinese patients were treated, and have since recovered and travelled back to China, the Thai health ministry said this week.

Vietnam confirmed two cases of the virus on Thursday. An infected man from Wuhan travelled to Ho Chi Minh City earlier this month and passed the virus on to his son.

Both are being treated in hospital and are stable, health officials said.

A Chinese flight attendant who arrived in Vienna on Friday has been quarantined in hospital since late Saturday with flu symptoms. The woman is believed to have recently been in Wuhan.

Authorities said it would take up to 48 hours to confirm whether the woman had contracted the virus.