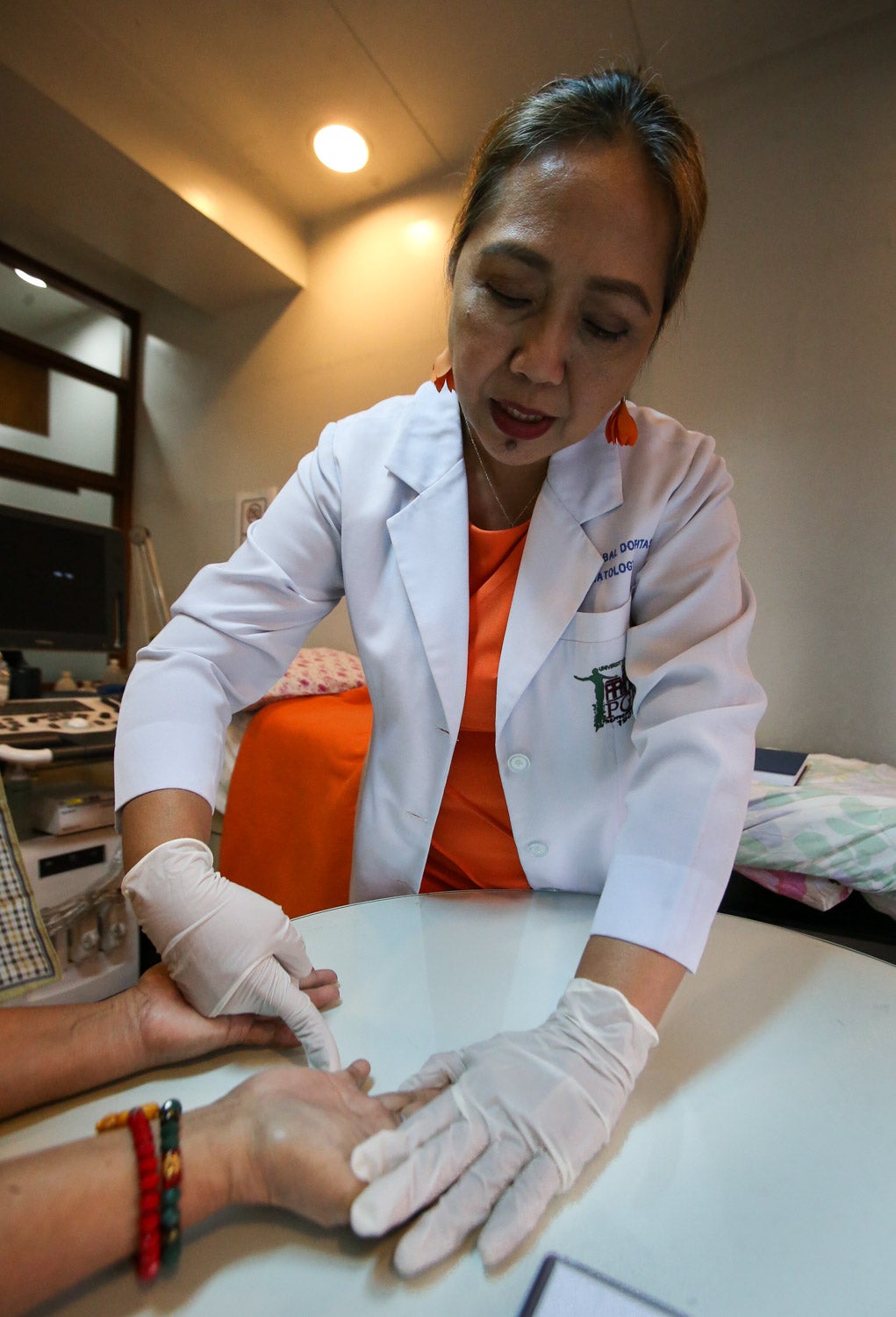 A HURDLE TO OVERCOME “There is a need to work on the level of acceptance,” says Dr. Belen Lardizabal-Dofitas, president of the Philippine Leprosy Mission, who cited the stigma associated with Hansen’s Disease as a major factor preventing those afflicted from consulting with medical professionals. —LYN RILLON

In the late 1990s, “Normie,” then 27 and a mother of two toddlers, noticed a whitish patch gro­wing near her right elbow.

She recalled thinking that she had contracted a skin ailment and proceeded to treat it with all kinds of medicines, including very expensive ones: “Akala ko buni. Kung anu-ano ang ipinapahid kong gamot, ang mamahal pa nung iba.”

Her part-time job as a ma­nicurist offered Normie a lot of free time, so she agreed when a relative due for a checkup asked her to tag along to the Philippine General Hospital (PGH).

While waiting for their turn at a doctor’s clinic, Normie noticed a queue at the dermato­logy department and decided to have her arm checked.

The doctor at the desk took one look at her arm and began pressing a cotton ball at random spots of the whitish patch. Normie recalled feeling nothing when some areas were pressed.

Eventually, the doctor told her that she had leprosy. The diagnosis was enough to make her cry all the way to the University of Sto. Tomas Hospital, where the doctors’ second opinion confirmed the PGH’s finding.

Normie took a jeepney to Sta. Cruz Church to pray and to ask what big sin she was atoning for: “Lord, anong malaking kasalanan ko?”

The medical community and patients also refer to leprosy—“ketong” in Filipino—as Hansen’s Disease. The long journey toward removing the stigma attached to it since ancient times remains unfinished.

According to dermatologist Belen Lardizabal Dofitas, pre­sident of the Philippine Leprosy Mission (PLM) board of trustees, the bacteria are transmitted in the air by untreated patients and inhaled through the nose and mouth. It is an infection of the nerves with skin signs.

The slow-growing bacteria may take between two and 10 years on average to manifest first as whitish patches or reddish lesions on the skin, with definite loss of sensation.

The disease is considered mildly infectious and can be transmitted through prolonged contact with an infected person. Those with weak immune systems are vulnerable. It can cause severe nerve damage and physical deformities if left untreated.

But unlike HIV (human immunodeficiency virus), Hansen’s Disease cannot be transmitted by a pregnant mother to her unborn child, or through sexual contact, a handshake, and sitting next to or sharing a meal with an infected person.

In biblical accounts of cases of leprosy, those afflicted—called lepers—are banished from their villages and required to wear bells to warn other people of their arrival. Priests administer funeral rites on them even when they are still alive to indicate that the community considers them deceased by virtue of their condition.

However, scientific innovations have shown that Hansen’s Disease can be treated in as short a time as six months for mild cases that are detected early.

The Philippines contribu–ted greatly to this progress, said Dofitas, who is also with the PGH Division of Dermatology. She said that in the last century, American doctors “did a lot of studies” at Leonard Wood Medical Center in Cebu and also on Culion, the island leper colony in Palawan.

After World War II the antibiotic Dapsone was developed, giving patients an option other than spending a lifetime in a leper colony.

The year 1964 saw the lifting of the Segregation Law imposed by the US colonizers, which required the confinement of leprosy patients to isolated areas like Culion. Patients were allowed to take the medicine at home instead of making frequent hospital visits. All the leprosaria were converted to general hospitals.

But while those afflicted with Hansen’s Disease responded favorably to Dapsone, many later developed resistance to it, Dofitas said.

The World Health Organization (WHO) now adheres to a multidrug regimen of two to three antibiotics depending on the severity of each case, she said.

The Japan-based Sasakawa Memorial Health Foundation and the Novartis Foundation have provided free and effective treatment for patients via a multidrug therapy through the WHO and the Department of Health (DOH)-National Leprosy Control Program. The WHO’s protocol applies to the Philippines.

Still, WHO records show that the Philippines is among those countries that recorded more than 1,000 new cases between 2011 and 2015.

Quoting the DOH, Dofitas said there were about 2,000 new cases a year in the Philippines—the highest in the Western Pacific. The number could be bigger but this depends on “how hard we are looking for new cases,” she said. 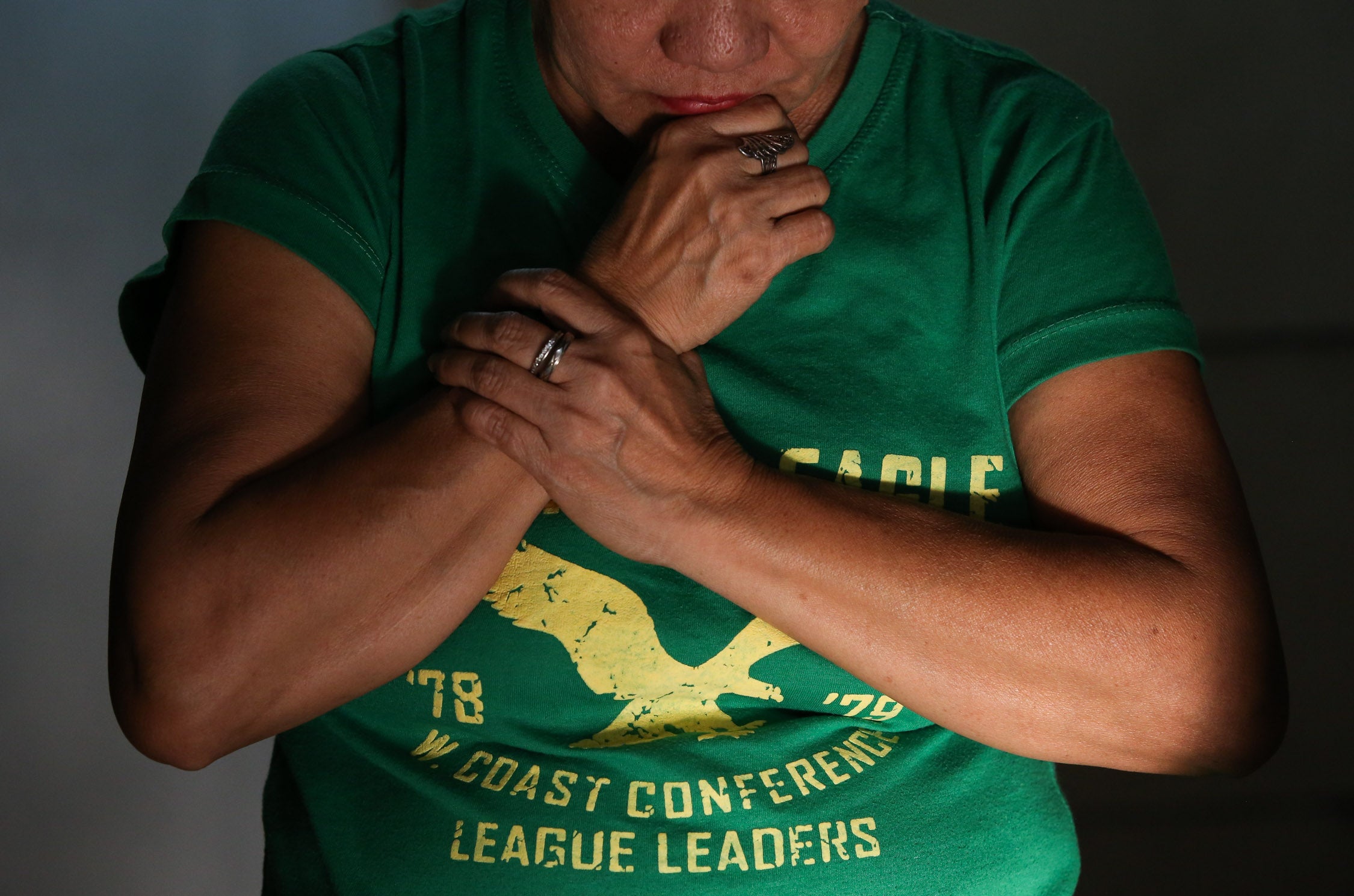 PULLING THROUGH “Normie,” 57, first sawleprosy symptoms on her right elbow in 1996 but was diagnosed only a year later. She complied with the doctor’s medical prescriptions and advice, avoiding alcoholic drinks and making sure she had adequate sleep to prevent weakening her immune system. Today, she no longer takes medicines for leprosy and is a member of the Philippine General Hospital’s Hansen’s Club. —LYN RILLON

Dofitas blamed the stigma associated with Hansen’s Disease as a major factor preventing those afflicted from consulting with medical professionals.

“There is a need to work on the level of acceptance,” she said. “Until now, we encounter cases of Hansen’s patients who suffer isolation, who delay consultations even when they live near a hospital, and who consult only when they [are in a severe stage]. The stigma prevented them from seeking help earlier.”

Dofitas said “segregation in leprosaria was the only way to control leprosy” in the early days. As a result, “there was also loss of property and, eventually, unemployment.”

“During the American period, the property of those with Hansen’s Disease was turned over to the city treasurer,” she explained.

Dofitas said the media were partly to blame for the wrong attitude toward Hansen’s Disease. Citing the overly dramatic portrayal of a patient as a beastly creature in a recently aired TV drama, she said episodes of the sort tended to frighten the public and failed to send the message that Hansen’s Disease was curable.

This could also lead to further discrimination, she pointed out.

In 1998, about the time Normie made her painful discovery, a group of dermatology residents at PGH organized the Hansen’s Club to provide psychosocial support to those afflicted with the disease.

Normie was among the first members and saw patients with more advanced cases than hers. “At first, I did not want to attend [the meetings],” she said, citing her fear that her condition would worsen.

But the PGH residents timed the club meetings with the checkups scheduled on Wednesdays.

Apart from social activities, the group also arranged seminars on nutrition, lifestyle changes and ways to financial security despite the disease. A pastor visited regularly to offer Bible readings and reflections. Soon, the PGH Medical Social Services came in to help facilitate activities for patients.

“We invite the newly diagnosed so they’d realize that they are not alone, that other people understand their pain and struggle and can give them spiritual support,” Dofitas said.

At present, regular Hansen’s Club members number between seven and 10 due to lack of funds. On busy days, the head count reaches 15.

The club is supervised by the PGH Division of Dermatology and the PLM, which also extends financial support.

The members are bent on moving forward despite the challenges. The PLM has a “PALS4PALs” (Persons Affected by Leprosy) project that offers peer counseling, training and a Speaker’s Bureau that trains former and current patients and their relatives to be public speakers on the disease.

Stories to be shared

World Hansen’s Disease Day is observed every last Sunday of January. The club has lined up activities for the Jan. 29 meeting.

“This year’s theme is ‘Reduction of Stigma and Discrimination.’ There will be speakers in the outpatient department. We will share stories and explain the disease,” Dofitas said.

She said that while the Hansen’s Club had become “the new normal” for patients, their families were encouraged to join to foster understanding.

“Patients go on with their lives, get married, have children. Some go back to school,” she said. “We had an educational assistance beneficiary who finished a master’s course. We have three patients undergoing the Alternative Learning System in Santa Isabel College. Some who missed high school are given another chance. There is recovery and life after leprosy.”

Looking back at the past 30 years since her PGH checkup, Normie said the ties fostered by Hansen’s Club had been beneficial to her and other patients.

“I’ve seen three pairs of Hansen’s patients get married, and one patient to another patient’s sister. It still pains me to see a new patient so hurt and confused. That’s why we ask them to join us,” she said, adding:

“Now I realize why I had to go to church right after my diagnosis. God put me here to give hope to the others. You won’t believe the bonding we have—the birthdays, the home visits. Sometimes we travel just to attend each other’s fiestas.”