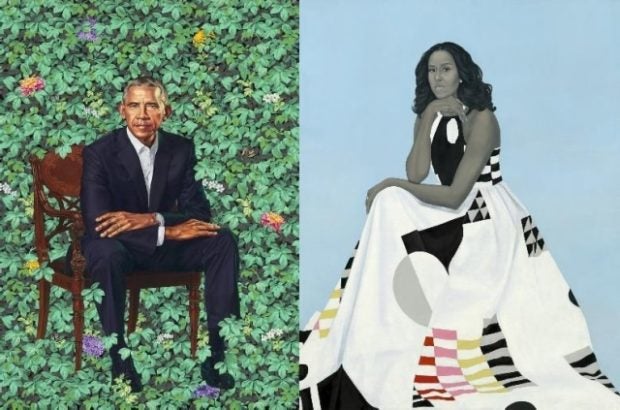 Kehinde Wiley and Amy Sherald’s portraits of the Obamas will go on tour across the US in 2021. Image: courtesy of the Smithsonian’s National Portrait Gallery

The nearly year-long tour will commence June 18, 2021 with a stop at the Art Institute of Chicago, before concluding on May 30, 2022 at Houston’s Museum of Fine Arts.

“Since the unveiling of these two portraits of the Obamas, the Portrait Gallery has experienced a record number of visitors, not only to view these works in person, but to be part of the communal experience of a particular moment in time. This tour is an opportunity for audiences in different parts of the country to witness how portraiture can engage people in the beauty of dialogue and shared experience,” he declared in a statement.

Wiley and Sherald made history when they became the first African-American artists commissioned by the National Portrait Gallery to create official portraits of a U.S. president and his First Lady.

Wiley’s portrait of Barack Obama depicts the 44th President of the United States solemnly sitting in a chair with his arms crossed, against a background of dense and verdant foliage.

In their first year on view, the portraits attracted so many visitors that the National Portrait Gallery saw its attendance figures nearly double, reaching a record of 2.3 million. NVG

Barack Obama quotes the Beatles in anniversary message to Michelle

Barack Obama unveils his list of best music from 2019

Read Next
Bato to reapply for US visa if Duterte wants him to join US-Asean summit
EDITORS' PICK
High inflation: Your P1 is now worth only 87 centavos
UK’s Boris Johnson will resign, BBC reports
Geek out at TOYCON 2022 powered by Smart Signature
House energy committee chair Arroyo bats for cheap electricity
High-risk pregnancy: Reducing your risk is in your hands
Unemployment rate up to 6% in May
MOST READ
Suspect in grisly killing of missing woman in Bulacan arrested
Hong Kong suspends flight bans as it eases COVID-19 rules
Kim Atienza’s daughter flaunts bikini body in response to critics of her ‘revealing photos’
Cop slain in Isabela ambush
Don't miss out on the latest news and information.