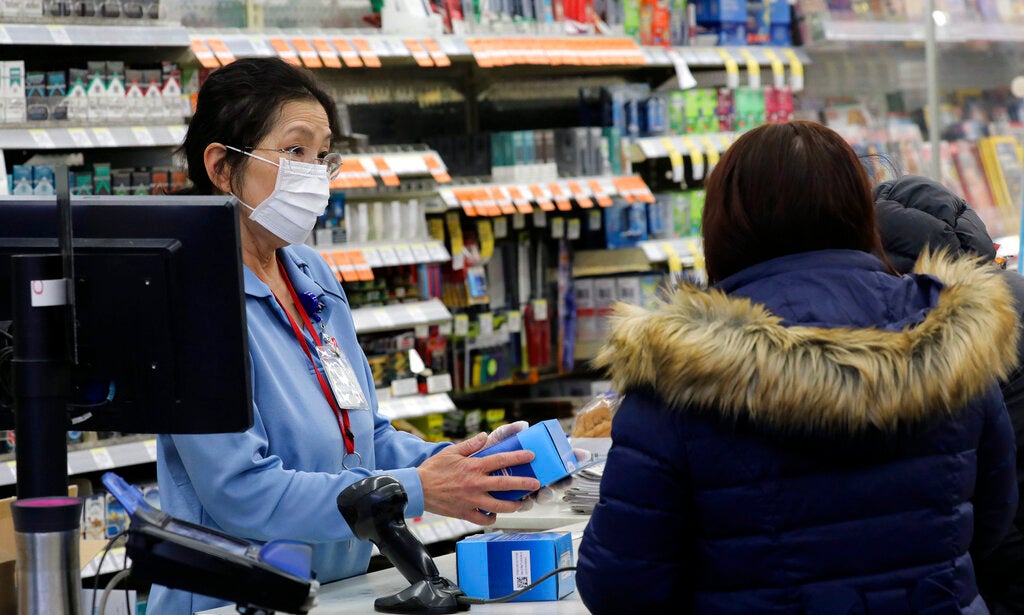 A sales clerk at a pharmacy rings up a purchase of face masks as fears of the coronavirus continues on Friday in Chicago.(Chicago Tribune via AP)

BEIJING–A SARS-like virus has claimed 26 lives since emerging on December 31 in a market in the Chinese city of Wuhan.

Here is a list of countries that have confirmed cases of the so-called coronavirus.

As of Friday, more than 800 people have been infected across China, with 177 in serious condition. Authorities were also examining 1,072 suspected cases.

Officials also confirmed the second virus death outside the Wuhan region, saying a patient died in Heilongjiang province, 2,000 kilometers (1,200 miles) to the northeast.

On Friday two cases were confirmed in France, the first in Europe. One was in Paris while the other was in the city of Bordeaux, the country’s health minister said. Both had traveled to China and both were placed in isolation.

Japan’s health authorities confirmed a second case on Friday, Kyodo news agency reported, saying the patient was a man in his 40s who was originally from Wuhan and on a trip to Japan.

The country’s first case was reported by the health ministry last week: a man who had visited Wuhan and was hospitalized on January 10, four days after his return to Japan.

Nepal’s health authorities on Friday confirmed their first case — a 32-year-old man arriving from Wuhan, China. It is the first South Asian country to report the deadly disease.

The patient, who was initially quarantined, recovered and was discharged. The government said that surveillance has been increased at the airport “and suspicious patients entering Nepal are being monitored.”

South Korea confirmed on Friday its second case of the virus.

The health ministry said a South Korean man in his 50s started experiencing symptoms while working in Wuhan on Jan 10. He was tested after his return earlier this week, and the virus was confirmed.

The country reported its first case on January 20 — a 35-year-old woman who flew in from Wuhan.

On Wednesday, authorities confirmed the first case on the self-ruled island of Taiwan — a Taiwanese woman in her fifties, living in Wuhan, who returned to the island on Monday with symptoms including fever, coughing and a sore throat.

Thailand has detected four cases so far — three Chinese nationals from Wuhan and a 73-year-old Thai woman who came back from the Chinese city this month.

Two of the Chinese patients were treated, cured and have travelled back to their country, the Thai health ministry said this week.

On Tuesday US health officials announced the country’s first case, a man in his 30s living near Seattle. On Friday a second case was announced – a woman in her 60s living in Chicago. Both were treated and are recovering.

Vietnam confirmed two cases of the virus on Thursday. An infected man from Wuhan travelled to Ho Chi Minh City earlier this month and passed the virus onto his son.

Both are being treated in hospital and are stable, Vietnam health officials said.