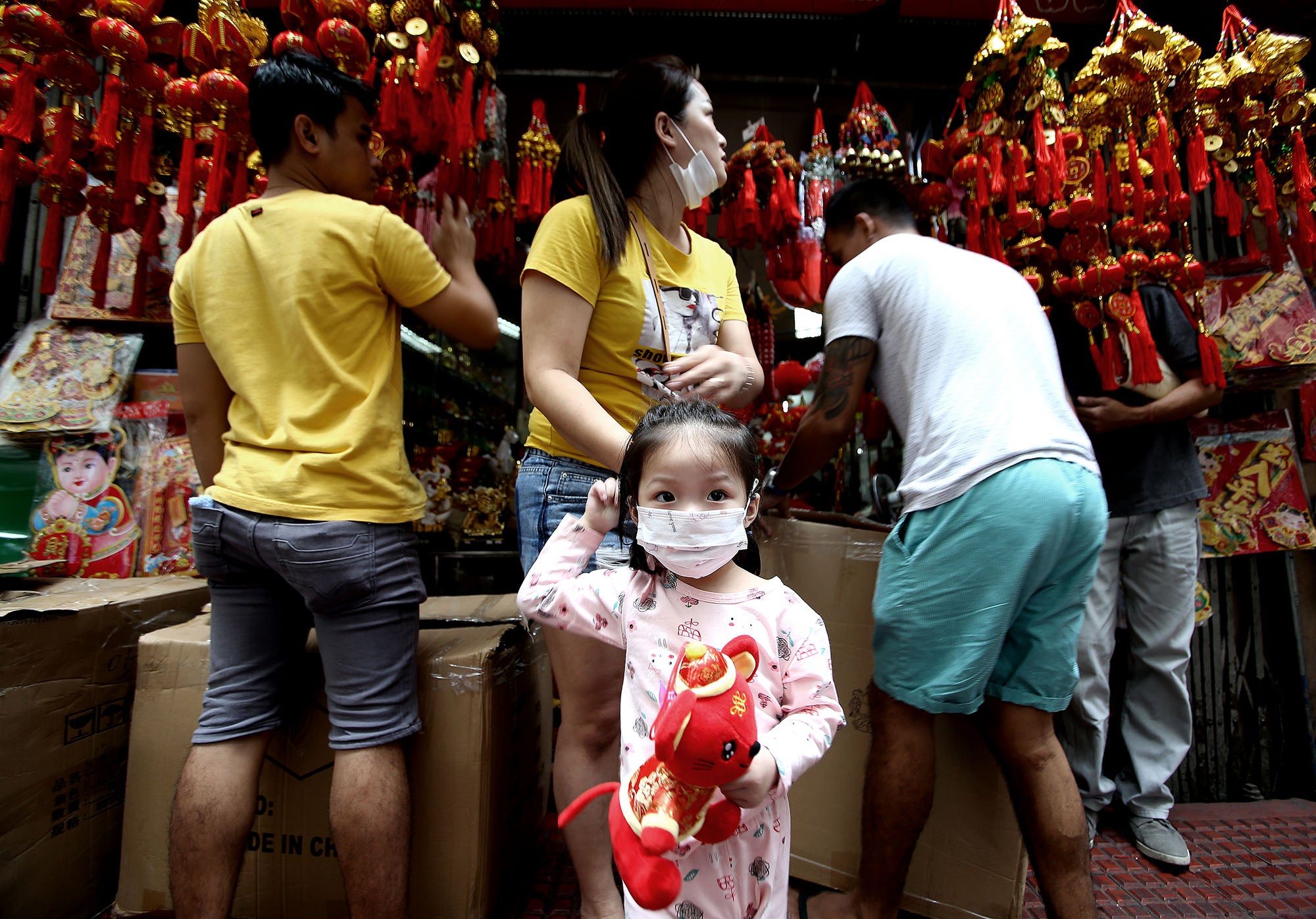 PRECAUTION A girl wearing a surgical mask as a precaution against infection as she accompanies her mother hunting for lucky charms in Manila’s Chinatown on Friday, on the eve of the Chinese New Year’s celebration amid the Novel Coronavirus scare that has prompted authorities to stop direct flights to the Philippines from the Chinese city of Wuhan, the epicenter of the outbreak which has killed at least 25 people. —RICHARD A. REYES

Aviation authorities on Friday said over 600 Chinese tourists who had entered the country on separate flights from the Chinese city of Wuhan must return home as scheduled in their package tours, giving them no time to extend their stay or to visit other parts of the Philippines.

The unprecedented move to send home such a large number of tourists as soon as possible was approved by Transport Secretary Arthur Tugade on Thursday as the government tightened measures to isolate the country from the potentially deadly novel coronavirus that health experts said had originated in Wuhan.

Civil Aeronautics Board (CAB) executive director Carmelo Arcilla said these tourists had flown directly to Kalibo International Airport in Aklan since the middle of last week, before he ordered on Thursday the indefinite suspension of all flights from Wuhan to prevent the entry of the new virus called 2019-nCoV.

“Wuhan is the center of the outbreak and the probability of transmission to our country is made highly possible because of the direct flights between Wuhan and Kalibo,” Arcilla said in a statement.He directed Royal Air Charter Services and Pan Pacific Air—the only two airlines with direct flights between Wuhan and Kalibo—to fly home by Monday all of the Chinese tourists, most of whom were in Boracay.

The two companies operate six chartered flights from Wuhan to Kalibo and back weekly.

“The tourists are not being forcibly repatriated to their country. They were scheduled to return,” Arcilla told the Inquirer.

He said there was no alarm or “untoward report” concerning 2019-nCoV from the Department of Health (DOH) but CAB was only being prudent.

In a bit of good news, Health Secretary Francisco Duque III announced on Friday night that a 5-year-old boy from Wuhan who had been isolated in a Cebu City hospital for nearly two weeks had tested negative for 2019-nCoV by an Australian Laboratory.

“This is indeed very welcome news to ease the Filipinos’ growing concern,” he said.

A Pan Pacific plane with 135 passengers arrived at the Kalibo airport around 6 a.m. on Thursday, the last flight before the CAB suspension order was imposed.

Eric Apolonio, spokesperson for the Civil Aviation Authority of the Philippines, all the passengers were allowed to proceed to Boracay after undergoing “rigid” screening by Bureau of Quarantine (BOQ) staff.

They were individually checked with hand-held thermal scanners to test for fever before they deplaned, he said, adding that they were “contained in one area in a hotel.”

Flights to and from other parts of China will continue, according to Apolonio.

A seafood market in Wuhan, a city of 11 million in Hubei province, was identified as the center of the outbreak. The virus has infected more than 800 people and has now killed at least 25 in China, according to Chinese authorities.

The virus has caused alarm because of its similarity to Severe Acute Respiratory Syndrome (SARS), which killed nearly 650 people across mainland China and Hong Kong in 2002 to 2003.

In all, 634 tourists from Wuhan would have been flown safely home by Monday, said CAB spokesperson and chief legal officer Wyrlou Samodio.

He said 178 were flown back on Thursday night by Pan Pacific and another 143 were expected to fly out on Friday night on Royal Air. The rest would be flown home on Saturday (178, via Pan Pacific) and on Monday (135, via Royal Air).

Tourism Secretary Bernadette Romulo-Puyat on Friday said she supported the suspension of the Wuhan-Kalibo flights.

“As what I always say, the safety [of tourists] is more important to me,” she told a news conference in Makati City.

She said it was too early to say what effects the spread of the virus would have on Philippine tourism.

According to official statistics, 21.73 percent of 7.48 million foreign tourists who visited the Philippines from January to November 2019 came from mainland China. There were about 1.63 million Chinese visitors, 40 percent more than in the same period in 2018.

Several residents of Boracay were alarmed that although none of the Chinese visitors appeared to be ill, they could still have been infected but did not yet manifest any of the flu-like symptoms of the virus. Some have taken to social media to call for a ban on all flights from China.

Boracay on Friday was packed with Chinese tourists, the biggest number of foreign visitors to the resort island for the Chinese New Year celebrations that start on Saturday.

The coronavirus scare has spread to Tacloban City where Dr. Nuberva Minerva Molon, the DOH regional director, vehemently denied reports on social media that a man from Wuhan was confined there after he was found positive for the virus.

“Only the Secretary of Health can confirm any case [of 2019-nCoV] because we don’t have yet scientific basis to declare there is an infection in Tacloban,” she told a news conference on Friday.

Health Undersecretary Eric Domingo said the man in Tacloban, was only a “suspected case” and was under observation and isolation in a hospital after getting sick.

The people who were in close contact with the man, an American, were told to stay at home and to report any respiratory-related illness, he said.

Quarantine guidelines In Manila, Ed Monreal, Manila International Airport Authority (MIAA) general manager, said he would “defer to the BOQ and submit to its guidelines” in helping stop the spread of the virus.

He ordered terminal managers to provide the BOQ staff space for their examination booths, which should have access to the tarmac in case there was a need to quickly transfer anyone to a hospital.

The MIAA would also help set up desks where passengers from China could fill out their health declaration cards.

Monreal said he also directed all terminal police chiefs to keep other airport staff and journalists away from quarantine areas, particularly where thermal screening and examination are done.

He has also instructed terminal managers to ensure that hand sanitizers were available in all the four Ninoy Aquino International Airport terminals.

Manila Mayor Franciso “Isko Moreno” Domagoso, said 100,000 masks originally intended as protection against Taal Volcano’s ashfall would be distributed to 896 villages in the city for individuals with low immunity and those who may have symptoms of 2019-nCoV. —WITH REPORTS FROM NESTOR P. BURGOS JR., LEO UDTOHAN, JOEY A. GABIETA, JEROME ANING AND NIKKA G. VALENZUELA