More donations pour in for families displaced by Taal eruption

Thousands of bottled water and a high-tech mobile water station, which is capable of processing 13,000 liters of drinking water a day, were donated to evacuation centers in Bauan and Batangas City by Lucio Tan Group, Inc. on Wednesday. 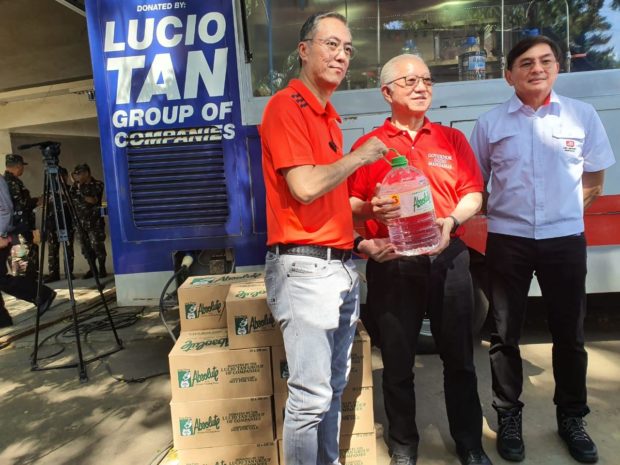 Meanwhile, Ako Bicol (AKB) Party-List, in partnership with Sunwest Care Foundation Inc. (SCFI) and Misibis Bay Resort, also conducted its relief operations at the Batangas City Sports Complex, where a special session was held by the House of Representatives.

Aside from donating a water finder and water drilling equipment, the group served “Pancit Bato” – a Bicolano delicacy – to the evacuees.

Multiple water systems are also scheduled for installation in different cities and municipalities like Tanauan, Ibaan, Rosario, and Lipa City to provide safe and accessible water to residents.

AKB and its partners said the project will permanently help the local government and its residents in their water needs especially in times of calamities.

Thousands of residents fled their homes after the Taal Volcano, the country’s second most active volcano, blasted a huge column of ash on January 12, causing heavy ashfall in Batangas province and other nearby areas and sending thousands to evacuation centers.

Taal Volcano remains under Alert Level 4, which means that “hazardous explosive eruption is possible within hours to days,” according to the Philippine Institute of Volcanology and Seismology.