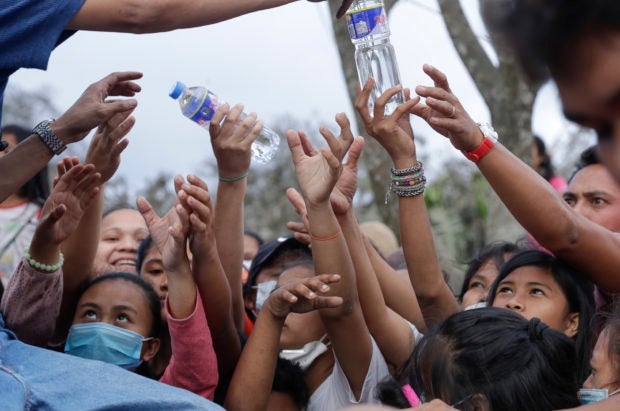 Residents scramble to grab bottled water given by a passing citizen at a town near Taal Volcano, Tagaytay, Cavite province, southern Philippines on Sunday Jan.19, 2020. Many poor families living near Taal volcano have been affected due to loss of income after business closures in the area, Philippine officials said Sunday the government will no longer allow villagers to return to a crater-studded island where an erupting Taal volcano lies, warning that living there would be “like having a gun pointed at you.” (AP Photo/Aaron Favila)

MANILA, Philippines — Poor hygiene and unsanitary water are just some of the problems that victims of the Taal Volcano eruption are facing at evacuation centers, an official of the Department of Health (DOH) said Friday.

In a briefing organized by the Philippine Disaster Resilience Foundation, DOH Health Emergency Management Bureau Dir. Gloria Balboa said water samples from the Batangas Provincial Sports Complex – one of the many evacuation centers in the province – tested positive for e-coli.

“This means that we really have to monitor this evacuation center,” Balboa said, adding that such finding makes “intensified” water testing on all drinking water available in all evacuation centers imperative.

“We also noticed that there are some bottled waters being donated without any brand, so [we] have to check where those come from,” Balboa also said.

She further said that while water supply is “overflowing” amid donations, another problem that came about was how to discard the single-use plastic bottles.

“You know, it’s not really good also to have all these donations of individual or single-use bottled water. It has to be reusable and [in] bigger plastic containers,” she pointed out.

Moreover, Balboa cited the lack of toilet facilities for evacuees as another emerging and urgent problem at evacuation centers.

“Forty-three percent only of the evacuation centers have adequate toilets. This we still have to do something about,” Balboa admitted.

And while some evacuation centers have portable toilets or “portalets,” Balboa said this only serves as a temporary quick fix.

“The problem is that the maintenance is so costly, so it’s not really cost-effective, it’s just a stop-gap,” she noted.

To address the lack of toilets, Balboa said a wash assessment team went around evacuation centers “to see the type of toilet facilities that can be constructed.”

“It could be semi-permanent or permanent, depending on the area. It is better to construct these types of toilets rather than using the portalets,” she said.

Balboa said DOH had a cluster meeting with its partners to address the problems at evacuation centers.