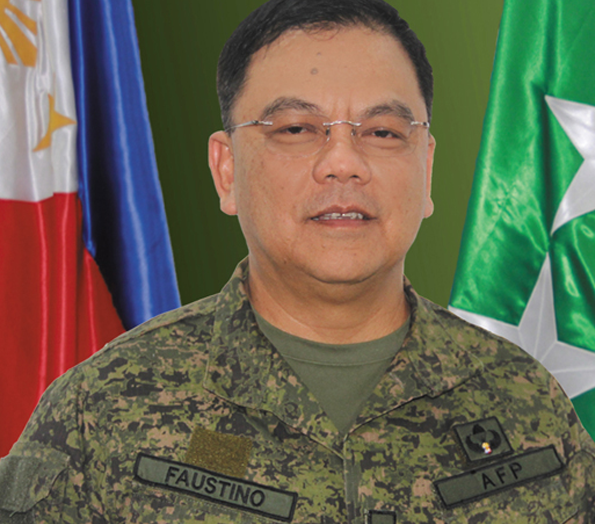 MANILA, Philippines — The regional military unit that had been a launching pad for future military chiefs under the Duterte administration has a new commander.

Eastmincom is in charge of all military units in Davao and Caraga regions, and Northern Mindanao.

Faustino is the replacement of Lt. Gen. Felimon Santos Jr., who took over the leadership of the entire Armed Forces of the Philippines early this month.

Five out of seven AFP chiefs under President Rodrigo Duterte had either served as commander of Eastmincom or one of its sub-units, the 10ID, before they took the helm of the armed forces. Davao is the hometown of the President.

Faustino, a member of the Philippine Military Academy “Maringal” Class of 1988, “made strides in the conduct of focus military operations, which resulted in the dismantling of various New People’s Army formations and their shadow government in the different communities in Region XI and XII” as 10ID commander, said Eastmincom public affairs chief Lt. Col. Ezra Balagtey in a statement.

The 10ID, one of the Army infantry units in Mindanao, covers the Davao region and parts of Soccsksargen.

Balagtey said that Faustino, who was a Scout Ranger officer in his junior years, is also “adept in a wide range of peace and security programs” across the country and not just in Mindanao.

He also served as commander of 11th Intelligence Service Unit based in Davao City; fought terrorists in Western Mindanao when he led the 35th Infantry Battalion, and subsequently the 501st Infantry Brigade as brigade commander, Balagtey said.

He also worked as a tactical officer and later on as commandant of cadets at the PMA. Later on, he became the assistant chief of staff for the training of the Headquarters Philippine Army.