FRONTERA HIDALGO, Mexico  –  Hundreds of Central American migrants were hauled onto buses by Mexican national guardsmen and immigration agents after crossing into the country early Thursday and walking for hours along a rural highway. 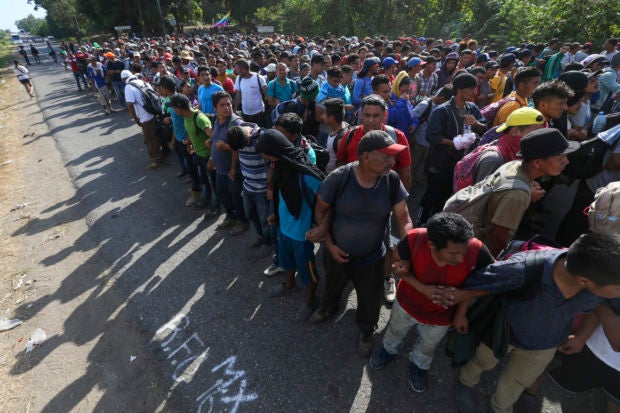 Migrants link arms on the highway leading to Tapachula, Mexico, Thursday Jan. 23, 2020, where they are blocked by National Guards. Hundreds of Central American migrants crossed the Suchiate River into Mexico from Guatemala Thursday after a days-long standoff with security forces. (AP Photo/Marco Ugarte)

The migrants had stopped for the day at a shaded crossroads when hundreds of national guard troops advanced their lines to within 100 yards (meters) of the migrants.

A brief negotiation stalled, the migrants knelt to the ground in prayer and began to chant “we want to pass.”

National guardsmen in riot gear advanced banging their plastic shields with batons and engaged the migrants. There was shoving and pepper spray as migrants were rounded up.

Many of the people allowed themselves to be escorted to the buses without resistance. Women cradling small children or holding kids’ hands wept as they walked toward the buses.

Others resisted and were subdued by guardsmen. One man dragged by four guardsmen shouted “they killed my brother, I don’t want to die,” presumably in reference to the possibility of being returned to his country.

A woman crying as she walked toward a bus said, “I have a great need for my children.”

A paramedic attended to an injured woman lying on the highway shoulder.

The road was left littered with water bottles, plastic bags and clothing. An irate man in a blue shirt yelled at the agents “this is a war against the Hondurans,” gesturing angrily.

It was a sudden climax after the day had seemed to be winding down.

Carrying U.S. and Honduran flags at the head of the procession, the migrants had been walking on a highway toward hundreds of national guardsmen since crossing the Suchiate river from Guatemala at dawn.

Jose Luis Morales, a Salvadoran de facto spokesman for the caravan, said the migrants wanted to negotiate to be allowed to pass peacefully.

The migrants halted late in the morning on the roadside about 6 miles (10 kilometers) north of the river border city of Ciudad Hidalgo, and a few miles (kilometers) of where a large deployment of security forces was waiting.

He said afterward that authorities’ initial proposal was that they turn themselves in for detention while being processed for refuge — what he called “always the same policy.” Instead, they planned to stay put until Friday, Morales said.

Aníbal, who declined to give his last name for fear of reprisal from immigration authorities, joined the majority Honduran caravan from his hometown of Santa Rosa, Guatemala. He and others rested in the shade of a tree Thursday morning after walking for hours along the highway.

He was determined to get to the U.S., no matter where, and work to save money and return to his wife and three kids. Back home he worked part time gigs as a laborer, machinist, selling used clothing, but there wasn’t enough work.

Asked about assertions from Mexico’s president that migration must be regular and orderly, he said: “He needs to have a little more compassion … we’re going out of necessity. We’re not going for ambition.”

Thursday’s movement was a resurgence of a migrant caravan that had been diminishing since its last concerted attempt to cross the border Monday was turned back by Mexican National Guardsmen posted along Suchiate river, which forms the border here.

The migrants awoke with a plan Thursday. By 4:30 a.m. they had all packed their belongings and were just awaiting the call to move. They would not cross where Mexican authorities were posted across the river.

They prayed for about an hour before leaving and then walked upriver on the Guatemala side in the dark to near another bridge that handles commercial traffic between the two countries. There were no Mexican authorities on the opposite bank.

There the water was deeper, coming to the waist of a grown man, so a number of young men entered the river first and formed a human chain to keep the women and children who followed from being pulled by the current. When the first migrants crossed at 6 a.m., it was still pitch black.

The national guardsmen awaited the caravan outside the community of Frontera Hidalgo, near Ciudad Hidalgo where the migrants crossed the Suchiate river at dawn.

Mexico began flying and busing members of the caravan back to Honduras on Tuesday.

Seven more buses left Mexico for Honduras on Wednesday, carrying 240 migrants back home, and two flights left with an additional 220 Hondurans, Mexico’s National Immigration Institute said. By Wednesday, the number of people outside the Casa del Migrante in Tecun Uman was perhaps half of what it was at its peak Sunday night.

In previous caravans, Mexican authorities have allowed caravans to walk for awhile, seemingly to tire them out, and then closed their path.

While the migrants have been receiving steady local media coverage since they arrived at the border, they have not surpassed topics of security, economy or corruption in the public agenda.

On Thursday, a multi-day march for truth, justice and peace departed the central Mexico city of Cuernavaca bound for the capital. The leader of that march, anti-crime activist Javier Sicilia, said part of Mexico’s problem were the “dozens of thousands of migrants treated without the dignity of human beings.”

Meanwhile, Mexican President Andrés Manuel López Obrador’s two-hour daily press conference was dominated by questions about the supply of cancer drugs as parents of children with cancer protested outside the national palace.

He has faced some criticism from the left for the more aggressive response to migrants, but seemingly not enough to blunt his high popularity.