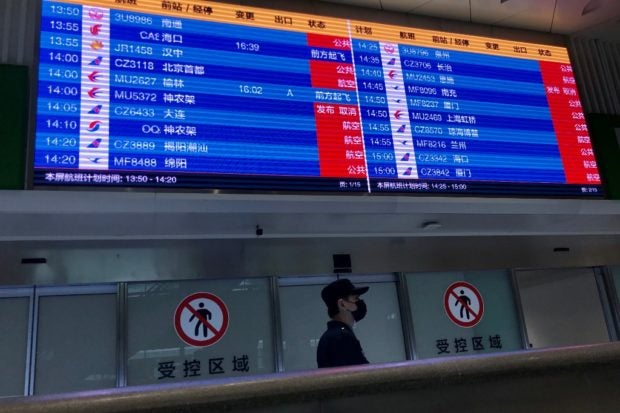 A man wearing a facemask stands under a screen showing mostly canceled flights at Tianhe airport in Wuhan in China’s central Hubei province on January 23, 2020. – China banned trains and planes from leaving a major city at the center of a virus outbreak on January 23, seeking to seal off its 11 million people to contain the contagious disease that has claimed 17 lives, infected hundreds and spread to other countries. (Photo by Leo RAMIREZ / AFP)

TOKYO — Passengers who made it out of epidemic-hit Wuhan just before quarantine measures effectively sealed off the Chinese city of 11 million spoke Thursday of shuttered stores and empty streets.

Authorities have banned planes and trains in or out of the major transport hub in a bid to contain the coronavirus that has already claimed 17 lives, infected hundreds, and spread beyond China.

One Japanese traveler arriving at Tokyo’s Narita Airport described a deserted city in lockdown and said he did not know how he would get back in.

“All stores have been shut since yesterday and no-one is in the streets. All the people are wearing masks,” said Minoru Okada, a Japanese auto industry businessman in his 50s, who was returning for the Lunar New Year holidays.

“Buses and subways have all stopped services,” he added, voicing concerns for his compatriots now stranded in the city.

“I’m supposed to return (to Wuhan) after the Lunar New Year but I don’t know how it will actually turn out,” he also said.

He said everyone on the three-and-a-half-hour flight was, like himself, wearing masks to avoid becoming infected. Asked what he had been doing to prevent infection, he said: “I wear masks and gargle.”

Kazuyuki Kamei, 60, also in the car manufacturing industry, said he had been in Wuhan for three weeks and travels to and from the Chinese city for business.

“I’m supposed to go back there next month but I have no idea if it will be possible,” he said. 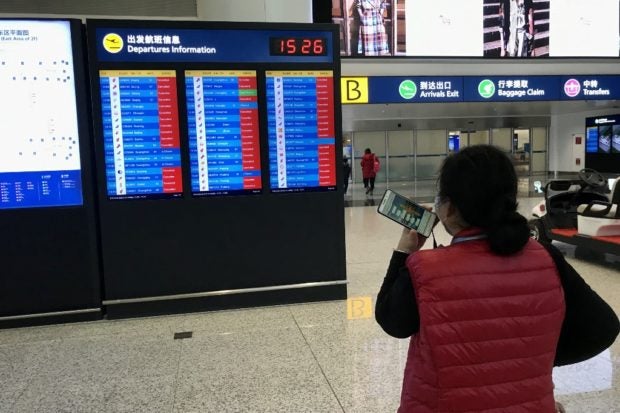 A woman looks at a screen showing mostly canceled flight at Tianhe airport in Wuhan in China’s central Hubei province on January 23, 2020. – China banned trains and planes from leaving a major city at the center of a virus outbreak on January 23, seeking to seal off its 11 million people to contain the contagious disease that has claimed 17 lives, infected hundreds and spread to other countries. (Photo by Leo RAMIREZ / AFP)

He told AFP his family was concerned about him staying in the epicenter of the virus.

“They’ve been worried about me. It wasn’t a big issue when I went there,” he said.

Kamei said his firm had given staff instructions on hygiene and avoiding infection. “We are being careful… I have a lot of masks!”

Passengers arriving into Sydney on one of the last flights out of Wuhan were greeted by biosecurity officials, as a global effort to contain the outbreak ramps up.

The mask-wearing travelers were briefed on the symptoms of the novel coronavirus and handed leaflets explaining how to respond if they noticed symptoms of the contagious disease.

“They suggested (that) everyone wear their masks, and actually everyone was (already) wearing their masks… even the flight crew,” said Kevin Ouyang, a 40-year-old father-of-two who was returning to his Sydney home after a business trip to China.

Australia’s chief medical officer, Brendan Murphy, said no ill passengers had been found on the flight, which left Wuhan shortly before Chinese authorities placed the city under quarantine and barred all departing aircraft.

But Murphy added during a press conference with Prime Minister Scott Morrison that because of its incubation period, travelers from Wuhan would need to continue monitoring themselves for flu-like symptoms.

“We need to contact a hospital,” a woman passenger, who didn’t give her name, explained when asked what she was told to do if symptoms arise.

Back at Narita, a Japanese businessman who declined to give his name noted the plane he was on was “probably the last flight out.”