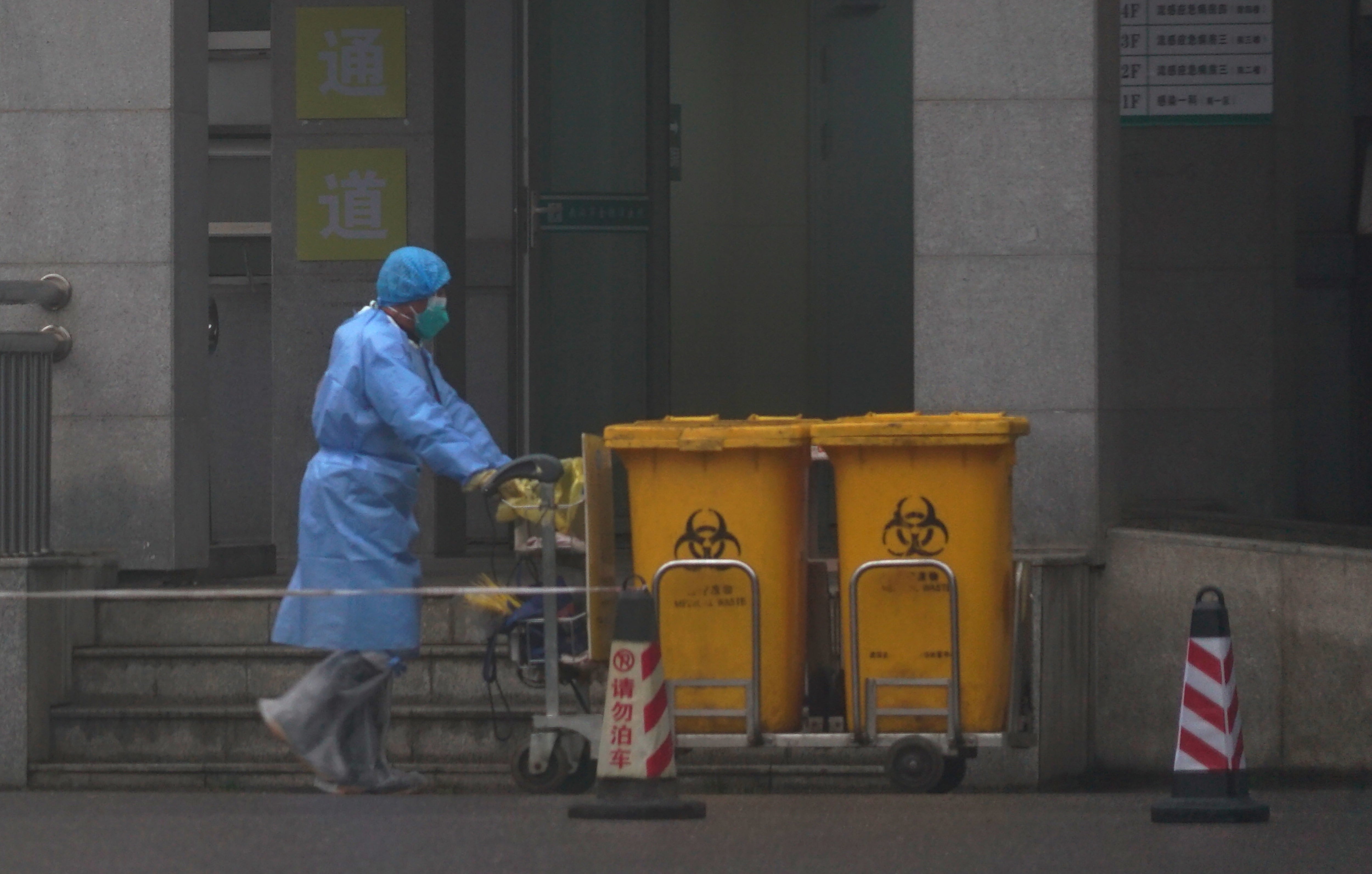 CITY OF CONCERN Biowaste containers on Wednesday are moved past the entrance of Wuhan Medical Treatment Center in Wuhan, China, where some of the people infected with a new virus are being treated. Officials of Wuhan, where the new virus originated, have urged residents not to leave the city and visitors to stay away if there is no reason for them to come. —AP

BEIJING—A new virus that has killed nine people, infected hundreds and already reached the United States could mutate and spread, China warned on Wednesday, as authorities scrambled to contain the disease during the Lunar New Year travel season.

The coronavirus has caused alarm for its similarity to SARS (Severe Acute Respiratory Syndrome), which killed nearly 650 people across mainland China and Hong Kong in 2002-2003.

The virus, originating in the central Chinese city of Wuhan in Hubei at the end of last year, has spread to Chinese cities including Beijing and Shanghai, as well as the United States, Thailand, South Korea, Japan and Taiwan.

The man is in his 30s, now in good condition and isn’t considered a threat to medical staff or the public, health officials said.

He had no symptoms when he arrived last Wednesday but started feeling ill the following day and went to the doctor on Sunday with a fever and a cough. Lab tests on Monday confirmed he had the virus.

The man is originally from central China, lives alone in the United States and made the trip solo, officials said.

There were relatively few people who came in contact with him since he returned, according to health officials.

Authorities in Wuhan canceled large public events and urged visitors to stay away, telling residents not to leave the central Chinese city of 11 million people.

The World Health Organization (WHO) said on Tuesday the new coronavirus—known by its technical name 2019 Novel Coronavirus (2019-n-CoV)—was likely to spread to other parts of China and possibly other countries in the coming days.

WHO spokesperson Tarik Jasarevic said new cases would appear as China stepped up monitoring. “If you increase surveillance and testing, you are likely to get new numbers,” he added.

The illness is mainly transmitted via the respiratory tract and there “is the possibility of viral mutation and further spread of the disease,” National Health Commission Vice Minister Li Bin said at a news conference in Beijing.

Hong Kong’s Cathay Pacific Airways Ltd., one of the airlines affected the most by the SARS outbreak, said it would allow flight attendants to wear a surgical mask while operating mainland China flights due to concerns over the new virus.

The Cathay Pacific Airways Flight Attendants Union said it had received a “tremendous” amount of messages from members concerned over catching the virus, and attendants on all flights should have the option to wear a mask.

WHO will hold an emergency meeting on Wednesday to determine whether to declare a rare global public health emergency over the disease.

The Chinese government has classified the outbreak in the same category as the SARS epidemic, meaning compulsory isolation for those diagnosed with the illness and the potential to implement quarantine measures.

But they still have not been able to confirm the exact source of the virus, which has infected 440 people across the country.

Another 2,197 cases of close contact with patients had been confirmed and there was evidence of “respiratory transmission” of the virus, Li told reporters.

“We will step up research efforts to identify the source and transmission of the disease,” he said, but noted that experts believed “the cases are mostly linked to Wuhan.”

Plane passengers are facing screening measures at five US airports and a host of transport hubs across Asia.

North Korea will ban foreign tourists entirely to protect itself against the virus, according to a major tour operator.

Animals are suspected to be the primary source of the outbreak, as a seafood market where live animals were sold in Wuhan was identified as ground zero for the virus.

“We already know that the disease originated from a market which conducted illegal transaction of wild animals,” said Gao Fu, director of the Chinese center for disease control and prevention.

“This might be the cause, so the disease could be on an animal, and then passed on from this animal to a human.” He said it was clear “this virus is adapting and mutating.”

Countries have been intensifying efforts to stop the spread of the pathogen—2019-n-CoV—as the number of cases jumped, raising concerns in the middle of a major Chinese holiday travel rush.

This week, China celebrates the Lunar New Year, the most important event in the Chinese calendar, with hundreds of millions of people traveling across the country to celebrate with family. Many also venture abroad.

On Wednesday, the health commission announced measures to contain the disease, including sterilization and ventilation at airports and bus stations, as well as inside planes and trains.

People are being urged to wash their hands regularly, avoid crowded places, open windows to allow in fresh air, and wear a mask if they have a cough.

Anyone with a cough or fever should go to a hospital, Li said.

At Beijing’s main international airport on Wednesday, the majority of people were wearing masks.

In Wuhan, Mayor Zhou Xianwang urged residents not to leave the city and visitors to stay away if there was no reason for them to come.

The local government has canceled public activities during the holiday, including the annual prayer-giving at the city’s Guiyan Temple—which attracted 700,000 tourists during last year’s holiday.

Tour groups heading out of the city have also been canceled.

Hong Kong and British scientists have estimated that 1,300 to 1,700 people in Wuhan may have been infected.