MANILA, Philippines — Seven in 10 Filipinos said they want a ban on single-use plastics across the country, a recent Social Weather Stations (SWS) survey commissioned by the Global Alliance for Incinerator Alternatives (GAIA) has shown.

In a statement on Tuesday, GAIA said the pollster found that most Filipinos believed that “the best thing to do with single-use plastics is to ban their use at all times.” 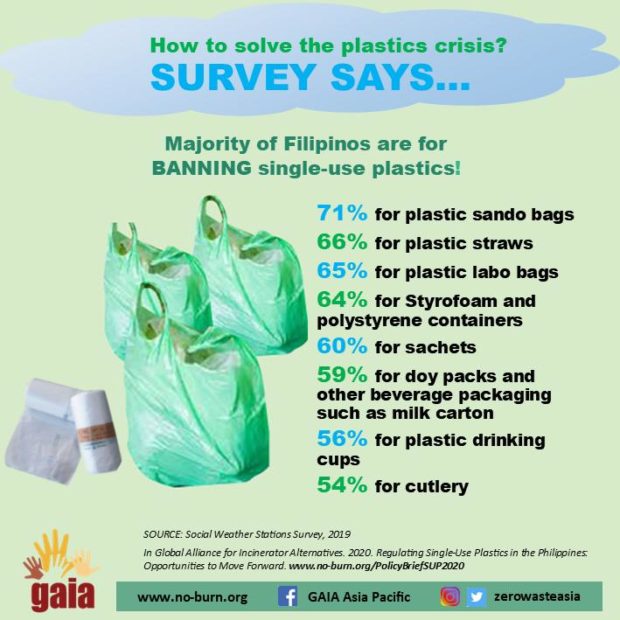 The SWS survey used interviews of 1,800 Filipinos aged 18 years old and above nationwide.

With this, the environment group called on the government to impose stricter policies on single-use plastics.

“We hope that the Philippine government seriously takes the public sentiment on single-use plastics. As shown in the results of the survey, plastic pollution is an important issue for Filipino consumers. They are willing to sacrifice convenience and are already looking into refill options and other alternative systems, ” Froilan Grate, GAIA director said in a statement.

Under the Republic Act 9003, or the Ecological Solid Waste Management Act of 2000, local government units are mandated to implement solid waste management in their respective areas as it “provides for a systematic, comprehensive and ecological waste management program to ensure the protection of public health and the environment.”