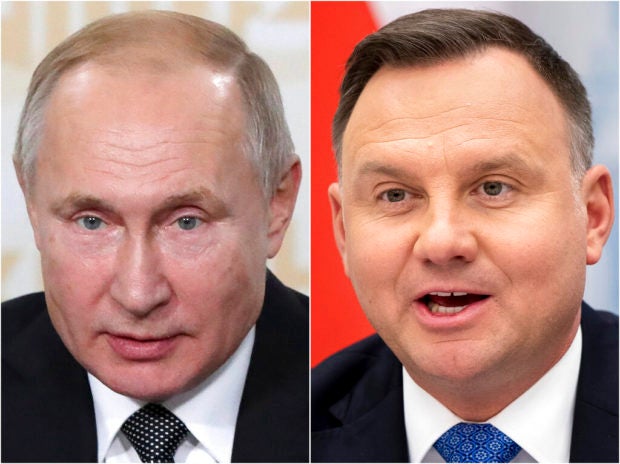 This combination of photos shows Russian President Vladimir Putin, left, on Nov. 27, 2019, in St. Petersburg, Russia, and Poland’s President Andrzej Duda in Vilnius, Lithuania, on Nov. 21, 2019. World leaders will gather twice to mark the 75th anniversary of the liberation of the Auschwitz-Birkenau concentration camp _ once on Thursday, Jan. 23, 2020, in Jerusalem and again on Jan. 27 at the Auschwitz site in southern Poland. The competing commemorations underline how politically charged World War II remains as nationalist governments in Russia and Poland seek to make some political gains from their bitter history. (AP Photo)

WARSAW, Poland — Over the next several days, world leaders will gather twice to mark the 75th anniversary of the liberation of Auschwitz-Birkenau, the most notorious of Nazi Germany’s death camps.

That there will be two competing ceremonies — one in Jerusalem on Thursday and the other at the Auschwitz site in southern Poland on Monday — underlines how politically charged World War II remains as nationalist governments in Russia and Poland seek to use their own interpretation of the past for contemporary political gain.

Leaders at both sites, joined by elderly survivors, will pay tribute to the 6 million Jews killed in the Holocaust. Yet the commemorations risk being overshadowed by a bitter dispute between Poland — where Nazi German occupiers operated Auschwitz and other infamous camps — and Russia, the successor state to the Soviet Union.

“I am afraid this will not help the commemoration of the Holocaust,” said Dariusz Stola, a Polish historian and former director of the POLIN Museum of the History of Polish Jews.

Such commemorations, he said, should ideally be a moment “for the present to serve the past.”

“Now the past is serving the aims of current politics,” he told The Associated Press.

Soviet forces liberated Auschwitz on Jan. 27, 1945. But the country had also signed a nonaggression accord with the Nazis shortly before the war began in 1939, known as the Molotov-Ribbentrop pact. It contained a secret protocol in which the totalitarian powers agreed to carve up Eastern Europe.

Two years later, Germany turned on Kremlin leader Josef Stalin and invaded the Soviet Union, bringing the Soviets into the war on the side of the Allies. Millions of Red Army soldiers lost their lives in the eventual defeat of Adolf Hitler’s Germany.

Russian President Vladimir Putin has sought to shift wartime blame to Poland over anger that historical memory in the West has begun to focus more on the Soviet role in triggering the war and less on its role in defeating Germany.

The Russian historical moves  have outraged the Polish government, which believes Putin’s main motive is to weaken Polish influence in the European Union. Warsaw is one of the strongest supporters of maintaining sanctions on Moscow for its annexation of Crimea and has also been fighting a planned Russian gas pipeline. Polish Prime Minister Mateusz Morawiecki has accused Putin of lying deliberately to deflect from his own failures, including a ban on Russian athletes over doping.

At the same time, Poland has come under criticism for allegedly minimizing the role its own people played in helping Nazi occupiers kill Jews.

Putin and other Russian officials have been claiming that Poland — which was invaded in 1939 by German and Soviet forces — actually bears blame for starting the war. Western historians see those allegations as a cynical ploy to minimize Soviet responsibility as Moscow today seeks to glorify what is known in Russia as the Great Patriotic War and more generally a Stalinist era that included mass killings of opponents at home and suffering imposed on Eastern Europe during decades of communist rule.

In recent days, Poland’s government has been defending the nation’s record, recalling how its wartime government-in-exile sought to save Jews by warning the world, and listing cultural and economic damage that Poland suffered after Soviet troops took control of its territory at the end of World War II.

In drawing dozens of world leaders to the World Holocaust Forum in Jerusalem, Israel had hoped to present a united front in commemorating the genocide of European Jewry and warning against the perils of modern-day anti-Semitism.

Instead, Polish President Andrzej Duda is boycotting the event at the Yad Vashem memorial because, unlike Putin, he was not invited to speak and wouldn’t be able to defend his nation’s historical record. Duda will preside at the Auschwitz ceremony, which Putin will not attend.

Israel has said it didn’t offer Duda a speaking role because his country was not among World War II’s liberating nations. It said the German president was also being allowed to speak to take responsibility for the perpetrators.

The deeper explanation appears to be rooted in Israel’s sensitive relationship with Russia.

The Jerusalem event is being orchestrated by Moshe Kantor, the president of the European Jewish Congress and a billionaire oligarch who is close to Putin.

In addition, Prime Minister Benjamin Netanyahu needs Putin on his side due to Russia’s involvement in the war in neighboring Syria, where Israel is deeply concerned about the presence of Iranian forces.

He also is hoping the Russian leader will free a young Israeli woman imprisoned on drug charges in Russia — a development that would give Netanyahu a welcome boost before national elections in March. During Putin’s visit, Netanyahu will dedicate a monument honoring the the nearly 900-day Nazi siege of Leningrad. The city, now known as St. Petersburg, is Putin’s hometown.

Israeli-Polish relations are still reeling over the Polish government’s controversial Holocaust speech law in 2018 that sought to criminalize blaming the Polish nation for the Holocaust. It was part of its wider efforts to portray Poles primarily as rescuers of Jews during the Holocaust while seeking to play down the fact that there were also Poles who abetted the Germans in hunting down and killing Jews.

Jan Grabowski, a Polish-Canadian historian at the University of Ottawa, argued recently that Putin was engaging in a “cynical falsification of history,” but added that Polish authorities, “discredited by years of twisting the history of the Holocaust, have lost any credibility and moral legitimacy to enter into a dispute in this field.”

The insertion of politics into such a solemn event clearly has been unsettling for historians and Holocaust survivors. But Yad Vashem historian Robert Rozett said he hoped the image of more than 45 world leaders coming together to remember the Holocaust would help it “rise above” what he described as unfortunate background noise.

“Using history for all kinds of things is very much a part of our world today and we as historians rail against it,” he told the AP. “But if if we were waiting for all the stars to line up and for everyone to be on the same page, we would never have an event like this.”