BATANGAS CITY, Philippines — Displaced, distraught, and no source of livelihood.

These fundamentally sums up the dilemma of evacuees from provinces near the Taal Volcano, which blasted a huge column of ashes and volcanic rocks on January 12.

More than a week since being forced to leave their homes with practically nothing but the clothes they were wearing, the evacuees were growing restless just as Taal Volcano continues its restive acts underneath.

Several barangay and municipal officials in Batangas have voiced out the many struggles their communities have been experiencing since Taal Volcano’s phreatic eruption or steam-driven episode during Wednesday’s session of the House of Representatives at the Batangas City Convention Center.

(We were not able to bring anything with us… Now I am letting you feel all of our sorrows and prevailing emotions.) 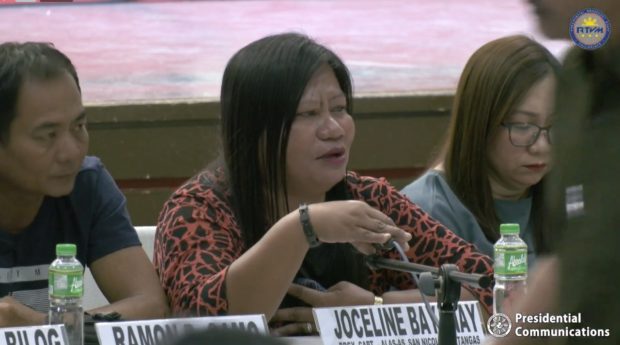 Joceline Bayanay, chair of Barangay Alas-as in San Nicolas town shares the plight of her constituents who are staying in evacuation centers during the session of the House of Representatives on Wednesday, January 22, 2020, at the Batangas City Convention Center in Batangas province. Screenshot from RTVM

Bayanay also pleaded that they be allowed to continue fishing – their only source of livelihood.

(Right now, our children have stopped schooling. Because how can their parents support them when we’re left with nothing to support them? And then, our main source of earning would even be taken away.)

Meanwhile, Agoncillo town mayor Daniel Reyes said that 9,000 of the 44,000 residents of his town are currently taking shelter at different evacuation centers.

“In just a few hours, the ‘Magandang (beautiful) Agoncillo’ that our town is known [for] has been deserted, devastated, and its people displaced. Our people are scattered over Batangas, Cavite, Laguna, Quezon, Manila, and as far as Nueva Ecija,” Reyes said.

Reyes agreed that there are still things to be “grateful” for despite the disaster and their difficult situation now – such that there were no casualties reported in Agoncillo and the Bayanihan spirit re-emerged. However, he also pointed out, Agoncillo town still has to face many problems created by Taal’s eruption.

“Our people, in spite of stern warnings and presence of armed personnel, have been sneaking in through various ways in order to feed their animals,” Reyes said.

“They have been begging to allow them to retrieve or feed their animals. Now, I know the feeling of being heartbroken. Yes, it is extremely painful,” he added.

Houses, buildings, and schools were also not spared, Reyes noted. 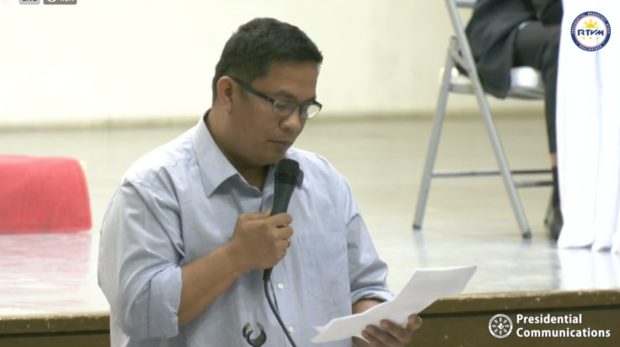 Agoncillo town Mayor Daniel Reyes says 9,000 of the 44,000 residents of his town are currently taking shelter at different evacuation centers. Reyes spoke during the session of the House of Representatives on Wednesday, January 22, 2020, at the Batangas City Convention Center in Batangas province. Screenshot from RTVM

He then urged the national government to allocate funds to retrieve the animals for purchase or “some other equally doable solutions.”

“Exactly 10 days after that fateful day, I am here before you, your Honors – exhausted, stressed,” Reyes said.

House Speaker Alan Peter Cayetano assured the local government officials that the national government is acting on their needs.

“We will be here to help but help us with the information we need. It does not have to be complete,” Cayetano said.

The Philippine Institute of Volcanology and Seismology has kept its Alert Level 4 over Taal Volcano. Such a high danger alert level means a fiery explosion of Taal Volcano is imminent within hours or days.

House leaders have since expressed support towards President Rodrigo Duterte’s call to expedite the passage of a P30-billion supplemental budget to augment the government’s calamity fund for Taal volcano’s eruption.