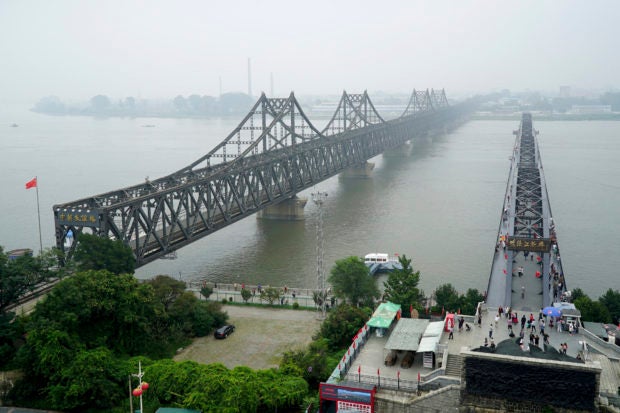 In this Sept. 9, 2017, file photo, visitors walk across the Yalu River Broken Bridge, right, next to the Friendship Bridge connecting China and North Korea in Dandong in northeastern China’s Liaoning province. North Korea banned foreign tourists to guard against the spread of a new virus from China, a tour operator said. The temporary closing of the North Korean border would begin Wednesday, Jan. 22, 2020. (AP Photo/Emily Wang, File)

SEOUL — North Korea has banned foreign tourists to guard against the spread of a new virus from China, tour operators in China have said.

Foreign travel to North Korea has been temporarily suspended as of Wednesday, the Beijing-based Uri Tours said on its website citing its partners in Pyongyang.

It said it wasn’t immediately known how long the travel suspension will last or what protocols will be implemented.

“Our future tours remain open for booking,” the agency said. “But should this border closure affect your travel, we are giving tourists the ability to reschedule at any time or to receive a complete refund of their deposit (less bank charges) as per our terms and conditions.”

Koryo Tours said in an email that North Korea “has closed all of their borders until further notice due to coronavirus.” Young Pioneer Tours said details about the travel suspension had not been elaborated by its North Korean partners.

Most foreign tourists to North Korea are Chinese or people who travel to the North from China, its major diplomatic ally and biggest aid benefactor.

Tourism has been one of the few legitimate sources of foreign currency for North Korea, which is under multiple rounds of U.N. sanctions over its nuclear program. The North has been building ski slopes, spas and other attractions to entice more tourists and revive its troubled economy.

North Korea hasn’t reported any cases of the new coronavirus centered in China. But its state media have reported about the outbreak in China to try to increase public awareness of the disease and its symptoms.

In 2003, North Korea closed its borders during the scare over SARS, which is caused by a different coronavirus. For several months between late 2014 and early 2015, North Korea also banned foreign tourists over fears of the spread of the Ebola virus.