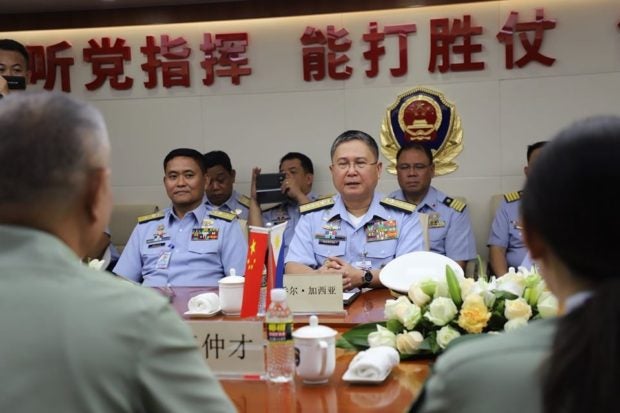 Philippine Coast Guard officials met with their Chinese counterparts, who were in Manila from Jan. 13 to 17 for high-level talks. PHILIPPINE COAST GUARD

The meeting of the Joint Coast Guard Committee between the Philippines and China, coincided with the first goodwill visit of a China Coast Guard vessel in Manila.

PCG commandant Adm. Joel Garcia earlier vowed to use the meeting to raise issues that will benefit the Filipino fishermen and government vessels in the West Philippine Sea, where there are frequent reported cases of harassment by the CCG.

The official notes of the high-level meeting held at the Diamond Hotel on Jan. 16, shared to Inquirer.net by a government source, did not directly mention the West Philippine Sea or other sensitive maritime issues.

However, it was mentioned that the coast guard chiefs of both countries “recognized the importance of protecting fisheries and other marine living resources and agreed to convey this concern to other relevant domestic agencies.”

The two coast guards also agreed on an information exchange protocol, which will initially focus on combating maritime crime, as well as search and rescue.

A “hotline communication mechanism” and “communication protocol for engagement at sea between coast guards” will serve as provisional operational arrangement between PCG and CCG.

The exchange also led to new opportunities for capacity building, according to the meeting notes.

The coast guard leaders approved the proposed two-week basic diving course by the PCG for the CCG tentatively set on the last week of May or first week of June this year. The venue has yet to be set.

It was also agreed upon that joint communication exercises would be conducted and the exercise plan must be drafted by April 2020.

Both coast guard leaders also recognized the importance of designating a coast guard attache on each other’s countries.

The next meeting of the two coast guards is tentatively set in May 2020 in Fuzhou City, Fujian, China.

Critics earlier questioned the presence of CCG in Manila and the red carpet welcome of the PCG.

After all, the CCG vessels are frequently encountered by Filipino fishermen and government vessels at sea. They are a common sight in the South China Sea, including the waters of its neighbors, because China believes it is part of their territory.

The CCG vessels block resupply missions of the Philippine Navy in the West Philippine Sea, and the same ones that drive Filipino fishermen away from their traditional fishing grounds.

At the same time that a CCG vessel docked in Manila for a week-long visit, another ship of the same type was spotted steaming back and forth near Ayungin Shoal, one of the areas occupied by the Philippines in the West Philippine Sea.

“That just shows that even while they say they want to be friends with us, they are putting presure on our BRP Sierra Madre in Ayungin Shoal… I think there’s a disconnect there somehow,” said retired Senior Associate Justice Antonio Carpio, a West Philippine Sea expert.