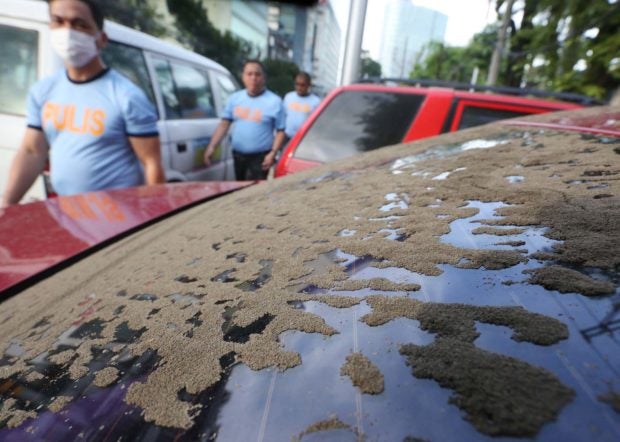 Ashfall from the eruption of Taal Volcano blankets vehicles parked on UN Avenue in Manila on Monday, January 13, 2020, turning a windshield into what looks like a relief map. Philippine Daily Inquirer/MARIANNE BERMUDEZ

MANILA, Philippines — The Department of Health (DOH) has recorded a total of 1,729 cases of acute respiratory infection due to ashfall from Taal Volcano’s eruption.

Balboa explained that respiratory illness is the “most common type of condition” being observed in evacuation centers for victims of restive Taal Volcano.

Taal, the second-most-active volcano in the country, suddenly came to life on January 12, spewing ash and steam up to 15 kilometers into the sky, forcing the evacuation of Volcano Island and several towns on the rim of Taal Lake.

The phreatic eruption or steam-driven episode created a blanket of ash covering several towns in Batangas and nearby provinces. The ashfall reached as far as Quezon City.

An Alert Level 4 remains hoisted over Taal Volcano, which means that a hazardous explosive eruption is possible within hours or days.