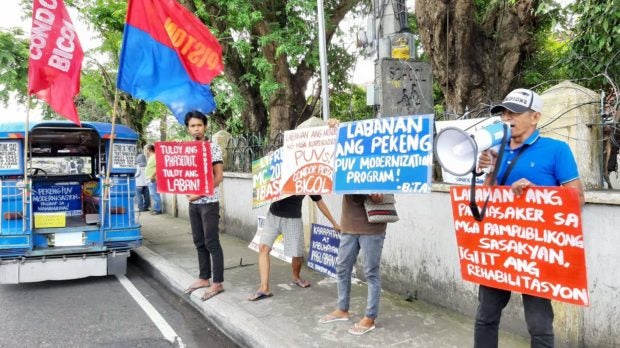 Members of transport group Condor-Piston Bicol call out the government for continuing to push the phaseout of the public utility jeepney in a protest rally in Daraga, Albay Monday. Photo by Michael Jaucian, Inquirer Southern Luzon

DARAGA, Albay—Members of a militant transport group in Bicol refused to give up their fight against the phaseout of aged jeepneys and their replacement with modern versions.

At a rally on Monday on Rizal Street here, members of Concerned Drivers and Operators-Piston brandished placards and assailed the Department of Transportation (DOTr) for a memo that would cancel the franchises of aged jeepneys that would not comply with the government’s modernization program.

Memo No. 2019-066, from the Land Transportation and Franchising Regulatory Board (LTFRB), which is under the DOTr, set the start of cancellation of franchises on June 30.

“They will kill us and our families and worst, the riding public,” said Ramon Rescovilla, deputy secretary general of the transport group.

He said there was no valid reason to phase out old jeepneys which are still plying routes in Albay and elsewhere because these were still reliable and serviceable.

The government is requiring jeepneys to have engines compatible with Euro 4 fuel, which is considered to be less polluting. But Rescovilla said jeepney units with this type of engines were very costly, not durable and have disposable parts unlike existing fleets of jeepneys that are not Euro 4 compliant.

He said if an estimated 3,700 jeepneys plying routes in Albay were phased out, “they’ve just murdered 5,000 drivers, their families and thousands of commuters, too.”