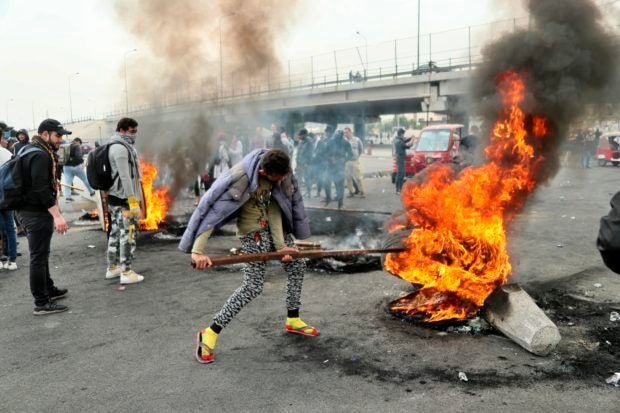 The mass protests had lost steam when soaring U.S.-Iran tensions threatened an open conflict on Iraqi soil in past weeks.

As the regional crisis receded, Iraqi activists gave the government a week’s deadline to act on their demands for sweeping political reforms or said they would up the pressure with new demonstrations.

The uprising began on Oct. 1 when thousands of Iraqis took to the streets to decry rampant government corruption, poor public services and a scarcity of jobs. Protesters are demanding an end to Iraq’s sectarian political system, alongside early elections and the stepping aside of its ruling elite.

The Iraqi officials spoke on condition of anonymity in line with regulations.

Three Iraqi activists said that more rallies are planned in the coming days as the protesters seek to refocus public attention on their mass movement.

Tensions between the U.S. and Iran peaked after an American drone strike killed a top Iranian commander and Iraqi militia leader outside Baghdad’s international airport.

Those killings prompted days of political turmoil across the region and Iraq that led to Iraqi lawmakers calling for a U.S. troop withdrawal.

Supporters of the influential Shiite cleric Moqtada al-Sadr say they are organizing a mass protest this week supporting calls for the ousting of American troops from Iraq in response to the U.S. drone attack.

The planned rallies in support of al-Sadr have prompted fears of more clashes with the anti-government demonstrators, who say they are against both Iranian and U.S. influence in Iraqi affairs.

Protesters have been in a standoff with security forces on three strategic bridges — Sinak, Ahrar and Jumhuriyah — that lead toward the fortified Green Zone, the seat of Iraq’s government.

Meanwhile, Iraq’s parliament postponed a critical session on Sunday due to lack of quorum. Lawmakers were expected to discuss candidates to replace outgoing Prime Minister Adel Abdul-Mahdi, who resigned in December under pressure from protesters. The next session is expected to be held Wednesday.

Protests were also held in the southern provinces of Najaf, Dhi Qar, Karbala and Basra.

Activists expressed fears that parallel protests planned by al-Sadr’s supporters to take place on Friday could eclipse their peaceful anti-government movement. However, al-Sadr has emerged as a supporter of the movement. Many of the protesters hail from Baghdad’s impoverished areas where the Shiite leader enjoys widespread support; his militia group, Saraya al-Salam, has acted as unarmed protectors for the demonstrators.

In a statement on Sunday, al-Sadr said he supported the recent escalation by anti-government protesters and lambasted the political elite for not selecting a new premier.

But activists said the protests called by al-Sadr supporters to oust U.S. troops could weaken their hard-fought movement.

“We are scared of one side trying to start a fight with the other side,” said Ahmed, 34, one of protest organizer in Baghdad’s Tahrir square, the epicenter of the movement. “For our part we are staying calm and focusing on our goals.”