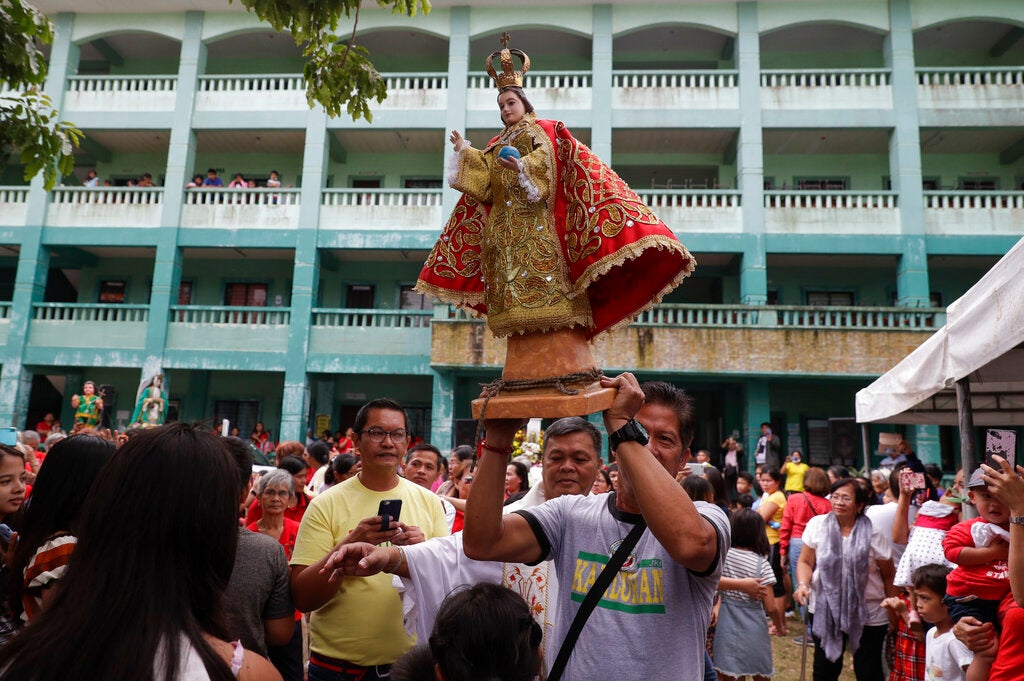 A man dances with a statue of the baby Jesus after a mass to celebrate it’s feast day at an evacuation center near Taal volcano in Tagaytay, Cavite province, southern Philippines on Sunday Jan.19, 2020. Taal volcano continued to emit plumes of smoke on Sunday, following nearly seven days of activity that have displaced massive numbers of villagers. (AP Photo/Aaron Favila)

MANILA, Philippines — The Philippine Institute of Volcanology and Seismology (Phivolcs) on Sunday cautioned evacuees against returning to Taal Volcano Island or any place within 14 kilometers of the crater because although it was showing weakening activity Taal could suddenly erupt, as it did a week ago, devastating a wide area on the rim of its once-beautiful lake.

The warning came amid reports that the number of evacuees in emergency centers had been shrinking since authorities allowed residents on Thursday a four-hour window in the morning to return to their villages to check on their houses, get belongings and feed pets and livestock.

Taal, the country’s second most active volcano, suddenly came to life a week ago, spewing ash and steam up to 15 km into the sky, forcing the evacuation of Volcano Island and several towns on the rim of Taal Lake.

After a week, however, the volcano appeared to have quieted down, only belching steam weakly. But Maria Antonia Bornas, chief of Phivolcs volcano monitoring and eruption prediction division, said on Sunday that while only minor eruptions were taking place now, a sudden phreatomagmatic eruption remained possible.

Phreatomagmatic eruption is an explosive eruption that results from magma — molten rock — erupting through water. It throws a high eruption column laden with pyroclastic fragments, and comes with a base surge, or a hot, rapid flow of ash and volcanic materials.

“We are already seeing a downward trend in our parameters, but we are still looking at the bigger picture that there is an intrusion of magma underneath the volcano,” Bornas told reporters.

“Even if Taal is quiet now, we have to weigh in what happened during the start of its activity. It was also quiet at first, then there was a rapid progression,” she said.

From Sunday morning till afternoon, Phivolcs observed weak emissions of steam-laden plumes that reached 300 to 500 meters high from the main crater of the volcano.

The Philippine Seismic Network (PSN) had plotted 701 volcanic earthquakes since Jan. 12. Between 5 a.m. and 4 p.m. on Sunday, 10 volcanic quakes were plotted, with one quake felt at Intensity I.

But the Taal Volcano Network, which can record smaller quakes that PSN cannot, recorded 244 volcanic tremors from 5 a.m. to 4 p.m. on Sunday, including three low-frequency earthquakes.

Phivolcs said such “intense seismic activity,” particularly the low-frequency events, signified that there was continuous movement of magma beneath the volcano, which could lead to eruption.

“While the earthquakes have lessened after the ground fissures, we still have record that magma continues to move,” Bornas said. “Since there are still earthquakes, we cannot relax just yet.”

The bigger amount indicates the upward movement of magma from the volcano’s belly.

Phivolcs maintains the alert level on Taal at 4, one notch below a hazardous, explosive eruption.

“We see that we have already passed the 1911 scenario,” Bornas said, referring to the destructive eruption in 1911 that lasted for only three days but left more than 1,300 people dead.

“We need to evaluate the possibility that there will be a prolonged activity,” she said. “We might have a lull period, followed by a big eruption.”

Col. Edwin Quilates, the provincial police chief, said towns within the 14-kilometer radius danger zone remained on lockdown, but some local governments had asked that residents be allowed to go back home briefly to inspect their properties and feed their animals.

Residents had been complaining since last week when police and local authorities placed their towns on lockdown as the volcano showed signs of imminent eruption. Looting was reported despite the danger.

Quilates on Sunday gave assurance that officers were patrolling the villages to prevent looting, and appealed to the evacuees to cooperate with authorities in enforcing the lockdown.—With reports from Jeannette I. Andrade and AP