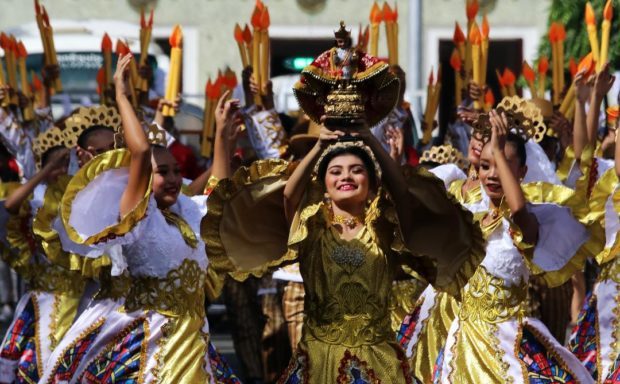 CEBU CITY, Philippines — Like any other child, 11-year-old Daisy Sarigumba loves to play at home during weekends.

But today, she has to forego her usual Sunday routine.

Sarigumba is one of the 180 children in Cebu City dancing for the “Sinulog sa Palaboy” (Sinulog for Child Wanderers), a guest contingent comprising of children from depressed communities in the city.

[I want to join the Sinulog because it is fun. I also want to meet new friends.]

Sinulog is a cultural and religious festival held every third Sunday of January in honor of the Santo Niño (Child Jesus). It is essentially a dance ritual that commemorates the Cebuanos’ pagan past and their acceptance of Christianity.

The festival highlights some of the country’s most colorful displays of pomp and pageantry: participants garbed in bright costumes dance to the rhythm of drums, trumpets and native gongs. 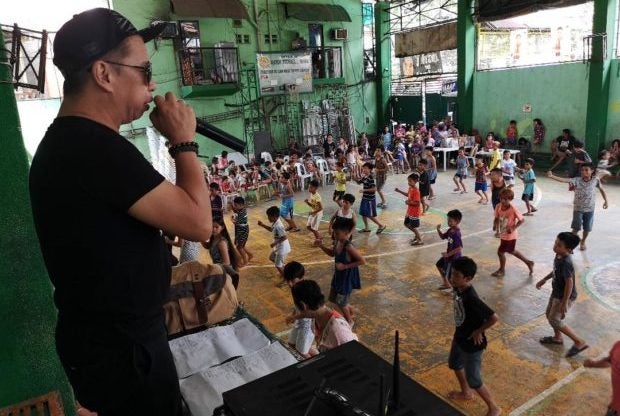 According to Val Sandiego, project director of the Sinulog Governing Board, the Sinulog sa Palaboy project gives children from poor communities the chance to feel that they belong to society.

“Through the years that I’ve been dancing the Sinulog, I’ve seen these children just watch the performances. This time, I want to give them the chance to dance, to be given importance, and to be part of the community,” he said.

“If you look at these kids, some have no slippers and they come from the most depressed areas in the city. Hopefully in the coming years, this would be a thing that people would look forward to — making these children find a place in society,” he said.

The traditional motion — two steps forward and one step backward — resembles the “sulog,” or water current from which the Sinulog dance originated from.

Barangay Mabolo is one of the places in Cebu City that has preserved the basic Sinulog steps.

“The whole idea here is to teach them to dance Sinulog the traditional way. Admittedly, the Sinulog nowadays has been modified. The traditional way is dying. This [Sinulog sa Palaboy] is a good way to preserve a Cebuano tradition. Imagine almost 200 kids dancing the authentic Sinulog,” Sandiego said.

“I think we should put more essence on the devotion to the Santo Niño, especially in dancing the Sinulog,” he added.

“The Santo Niño is basically for children. This Sinulog sa Palaboy project is intended to give these kids long-term assistance. We want to go beyond the January festivities. We want to monitor these children as they grow older. That’s the plan,” he said.

Those dancing for the Sinulog sa Palaboy were chosen by their village chiefs. The children, between 6 and 12, came from poor communities in Ermita, Taboan, Santo Niño and Mabini.

“One of the challenges in dealing with these children is how to stretch your patience. You don’t want them to be traumatized so you have to befriend them. You have to adapt to their character,” Sandiego said.

Zhane Miñoza, 16, a Sinulog dancer from Barangay Mabolo, was among those tapped to teach the children how to dance the traditional way.

She said it was a blessing to be given a chance to teach the children the steps she had learned for the past 10 years.

“I feel overwhelmed that I can now help. Before, I was the one being trained. Now that I have learned the steps, I can also teach the kids. This is a blessing for me,” said Miñoza, who has been a Sinulog dancer since she was in preschool.

The children started practicing the basic steps in their respective villages last month.

The Sinulog sa Palaboy performed during the launching of the 2020 Sinulog Festival on Jan. 10, drawing applause and cheers from the crowd.

“We just have to accept these kids with open arms,” said Sandiego, who sponsored the group’s costumes.

And everyone in the group was excited to be among the 26 contingents dancing along the 6.5-kilometer route of today’s Sinulog Grand Parade. 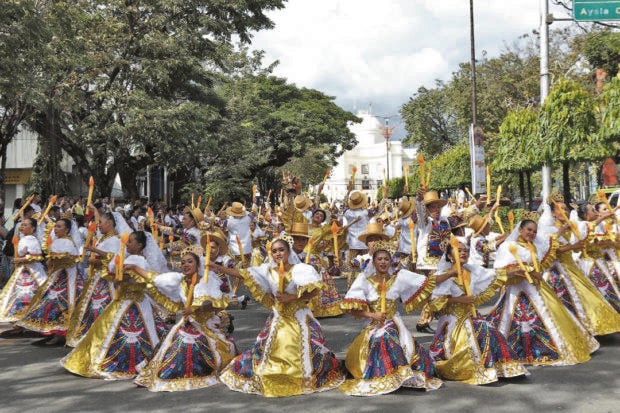 A guest contingent from South Korea, who participated in 2019, is also joining the parade.

But expect security to get tight at Cebu City Sports Center, the final staging point of the contingents. To secure devotees and revelers, close to 6,000 policemen have been deployed to all activities related to the Fiesta Señor.

Side by side with the government-led revelries is the religious activity which is also expected to draw thousands. People are expected to troop to Basilica del Sto. Niño in downtown Cebu City to celebrate the feast of the Child Jesus.

Cebu Archbishop Jose Palma will celebrate Mass at 6 a.m., to be followed by eight other Masses at the basilica’s Pilgrim Center. At 9 a.m., the Sinulog beat rings across the city to signal the start of the biggest and grandest festival in the country.