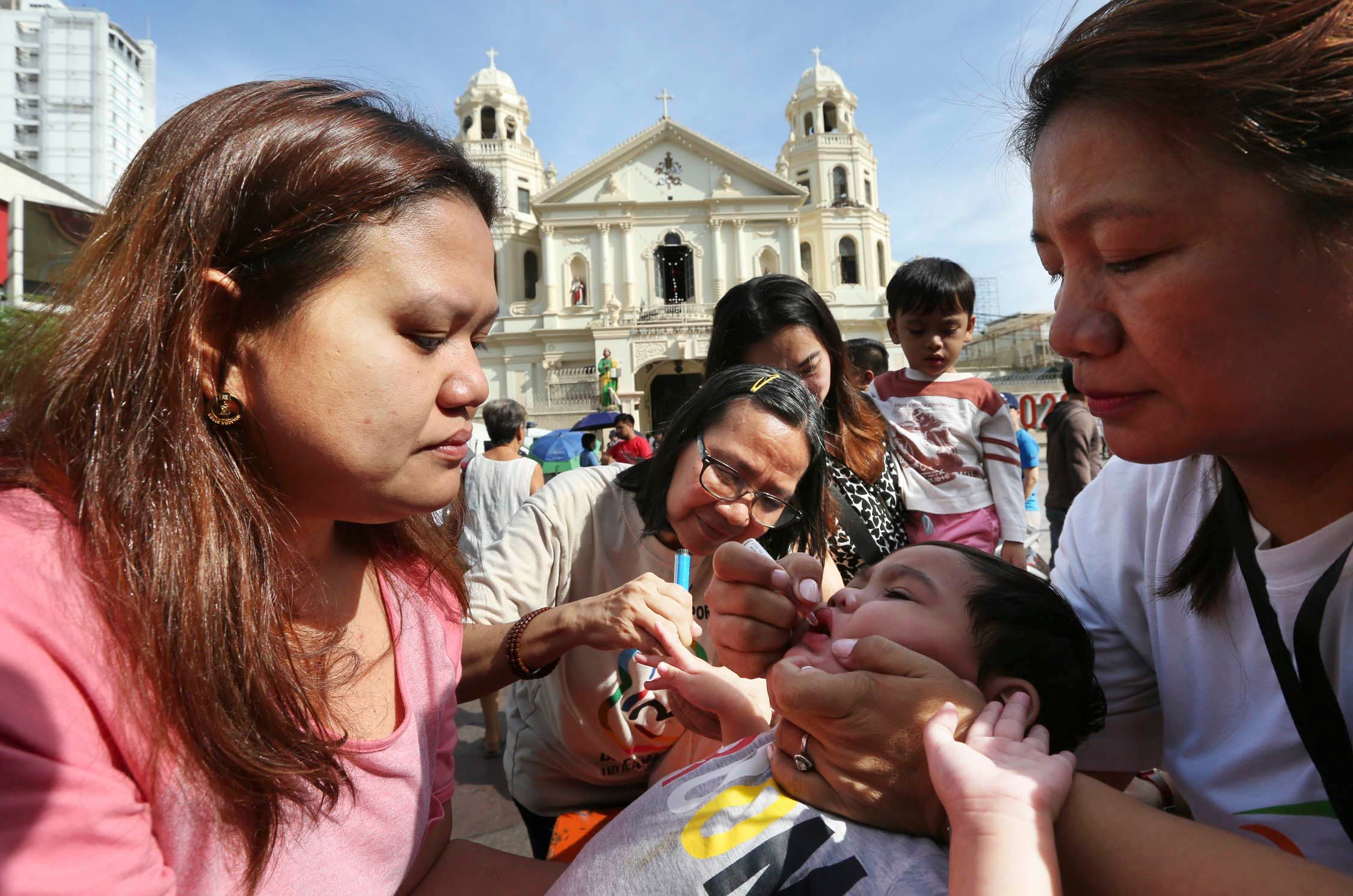 CAMPAIGN Health workers from Manila City Hall set up a free polio vaccination area outside Quiapo Church, in an effort to persuade the public to have their children inoculated against the deadly disease. —MARIANNE BERMUDEZ

Health Secretary Francisco Duque III again urged parents to have their children inoculated against polio after investigators found that the first polio victim in Metro Manila had received the five required polio vaccine doses but not the one for the virus strain found in most new cases.

“He was not covered for the Type 2 (polio virus) because the World Health Organization recommended that the Type 2 was no longer part of the circulating wild polio virus so it was stopped. Although I think it should not have been the case,” Duque said, referring to the virus strain that emerged in the country in September.

On Thursday, health officials reported that the number of polio cases has climbed to 16 after an outbreak was declared in September 2019 and marked the return of the disease in the country after 19 years.

To address the outbreak, Duque said the Department of Health (DOH) stepped up its immunization program and had been inoculating since October children in Luzon and Mindanao where 16 of them, including a male toddler in Quezon City, had contracted the virulent disease.‘Herd immunity’

In a bid to stem more cases, Quezon City Mayor Joy Belmonte said the city government will immediately hold another round of vaccinations as soon as City Hall gets the vaccines from the DOH.

Duque explained that the boy from Quezon City tested positive for the Type 2 circulating vaccine-derived polio virus although he had completed the immunization course recommended for Type 1 and Type 3 polio viruses.

Moreover, Health Undersecretary Eric Domingo said the toddler had several illnesses and had a compromised immune system that made him vulnerable to diseases although he received the recommended oral polio vaccine doses from health centers since 2016.

Duque reminded parents that two rounds of the government’s Sabayang Patak Kontra Polio campaign will be held in the National Capital Region from Jan. 27 to Feb. 7 and again from March 9 to March 20.

The government, he said, has enough vaccine supplies to achieve 95-percent immunization that is crucial to herd immunity.

Duque said the results of the inoculation program over the past three months showed that the government had regained public trust in its vaccination program.

“Let us not forget to bring our children to the new round of immunization so they can be given oral polio vaccine,” Duque said.

He also reminded hospitals to be alert for any signs or symptoms of polio and other diseases of public concern and report such cases as required by Republic Act No. 11332, or the Mandatory Reporting of Notifiable Diseases and Health Events of Public Health Concern Act.

Meanwhile, health officials in Mindanao also urged parents to take advantage of the Sabayang Patak Kontra Polio campaign, which is the most effective way to fight the polio virus which has claimed seven new victims in Maguindanao.

On Jan. 20, more than 1,000 health workers will again troop to homes across the province to administer the third round of antipolio vaccines to children age 59 months old and below.