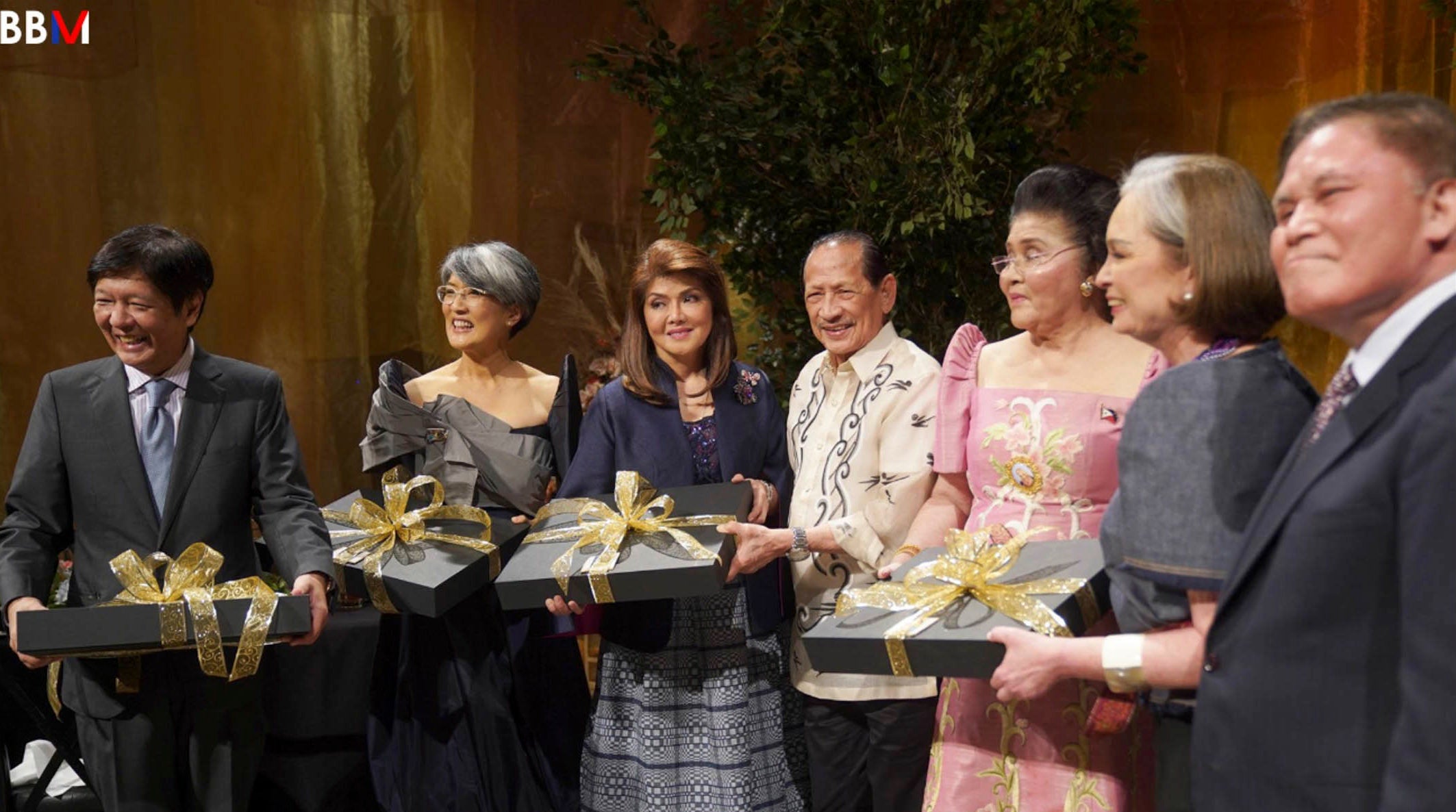 APPRECIATIONP ARTY UNDER FIRE It was as if the 1986 Edsa People Power Revolution that chased the Marcoses out of the country never happened, as Cultural
Center of the Philippines (CCP) chair Margie Moran-Floirendo (second from right) hands Imelda Marcos a gift during the CCP’s appreciation dinner for the former
first lady as part of the agency’s 50th anniversary celebration. Sharing the honors are (from left) losing vice presidential candidate Bongbong Marcos, Irene Marcos-
Araneta and Sen. Imee Marcos. Looking on are CCP president Nick Lizaso (center) and former CCP president Baltazar Endriga. —FROM BONGBONG MARCOS TWITTER

The appreciation dinner that the Cultural Center of the Philippines (CCP) hosted for former First Lady and graft convict Imelda Marcos as part of its 50th-anniversary celebration also saw the launching of a fund-raising campaign for survivors of the Taal Volcano eruption. CCP chair Margie Moran-Floirendo made this disclosure late afternoon Friday following the huge social media backlash that followed the Wednesday night event.

Netizens who monitored the event on social media criticized Floirendo and the CCP board of trustees for pushing through with the event as thousands fled their homes and languished in evacuation centers due to the restive volcano, which rained sulfur-smelling ash on surrounding towns and cities.The CCP statement was silent on the online furor.

Floirendo would not provide the amount raised so far for Taal survivors, saying the fund-raising “is still ongoing till Jan. 30.”

“Last Jan. 15, 2020, the CCP hosted an appreciation dinner for Mrs. Imelda Marcos to recognize her contribution as founding chair of the institution. It was in this dinner that we launched a fund-raising campaign for the Taal victims,” the center said.

Photos taken at the CCP main lobby that found their way to social media showed the cavernous venue spruced up to accommodate three long tables lined with floral arrangements that ran from end to end. Each table had table settings meant to accommodate at least two dozen guests.

Guests later posted photos of Marcos—currently out on bail after her conviction on seven counts of graft last November—wearing an embroidered pink “terno” with a miniature Philippine flag pinned on the left side of her chest. Her three children Sen. Imee Marcos, losing vice presidential candidate Ferdinand “Bongbong” Jr. and Irene attended the dinner.

The CCP said the board of trustees “expresses gratefulness to all who have contri­buted to the vision and mission of the institution. As one of the first performing arts centers in the region, the CCP has sponsored talented Filipinos who have gained worldwide recognition, brought international artists to the Philippines and in general, helped revitalize and raise awareness of Philippine arts and culture.”

It added that several activities had been lined up “to recognize and celebrate people and institutions that have contributed significantly to the CCP throughout the years.”

While the statement did not specify the lineup, one notable offer later this month is CCP Arthouse Cinema’s premiere of “The Kingmaker,” an award-winning documentary helmed by Lauren Greenfield that “explores the legacy of the Marcos regime and examines the Marcos family’s improbable return to power in the Philippines.”

Two screenings will be held on Jan. 29 at the 421-seater Tanghalang Aurelio Tolentino, aka Little Theater: a matinee at 3 p.m. and a gala screening at 7:30 p.m.

News of the CCP event drew sighs of dismay on social media, with netizens calling it “insensitive,” coming as it did three days after Taal Volcano spewed tons of ash and sent at least 60,000 residents to eva­cuation centers.

Twitter user @radikalchick (katrinastuartsantiago) slammed the “fancy sit-down dinner [that used] taxpayers’ funds. For who you ask? Why, the Marcoses of course! #BlockMarcos”

Another account @mackiePzamarro (Mackie Zamarro) called out the CCP chair: “Thank you Margie Moran. Your ‘wisdom’ never ceases to amaze me … Dining with the dictator’s notorious wife, feasting on the best and the most expensive food available while Taal evacuees make do with donated sardines and noodles. How fitting it really is, right Margie?”

The furor recalled similar protests in September 2009 by the Concerned Artists of the Philippines and party list groups Bayan Muna and Alliance of Concerned Teachers, when the CCP also paid tribute to Imelda Marcos as part of its 40th anniversary.

The tribute, a musical suite titled “Seven Arts, One Imelda,” featured performances by some of the country’s most distinguished artists and a fashion show of extravagant ternos by the country’s top couturiers.

Described without irony by Bongbong Marcos in his remarks as “suitably imeldific,” the invitational gala event, according to the CCP website, aimed to “extol the seven arts through signature pieces created during the period of Imelda’s patronage.”

‘Sanctuary for the arts’

CCP officials, who said the tribute was in recognition of Imelda’s role in founding the “sanctuary for the arts” that the institution has become, brushed off the protesters’ objections that the event was meant to deodorize the “excesses and abuses” of the Marcoses’ 21-year rule.

Said then CCP vice president and artistic director Raul Sunico: “We want to give this tribute irrespective of political color. Let art and politics be separate.”

Imelda’s response to the protests was typical: “As you can see, beauty conquers everything. Because beauty is God. And God will always prevail.”

Imelda has been widely credited as the driving force behind the construction of the CCP edifice, which was designed by National Artist Leandro Locsin and was recently declared a National Cultural Treasure.

Ferdinand Marcos’ Executive Order No. 30, signed in 1966, established the CCP “with the purpose of promoting and preserving Filipino arts and culture.”

The agency is currently attached to the Office of the President and operates under the umbrella of the National Commission for Culture and the Arts “for policy and program coordination.”