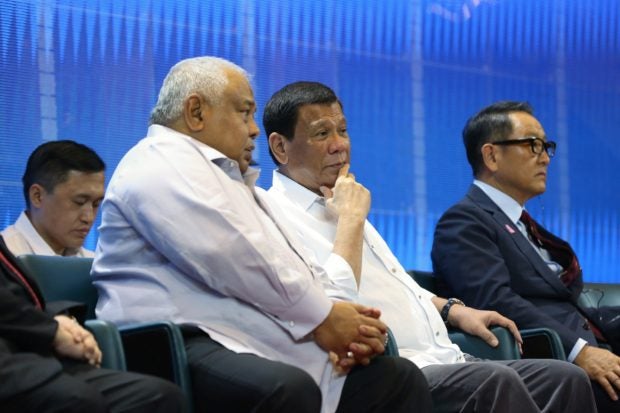 President Rodrigo Duterte chats with Executive Secretary Salvador Medialdea in one of the events of the President. KARL NORMAN ALONZO / PRESIDENTIAL PHOTO

MANILA, Philippines — “The real change we have all yearned for, for so long is now happening.”

This was the pronouncement of Executive Secretary Salvador Medialdea on Friday during the Duterte Legacy Campaign at the Philippine International Convention Center (PICC) in Pasay City wherein members of President Rodrigo Duterte’s government presented the achievements their offices had achieved so far.

Medialdea said that three years into Duterte’s term, Filipinos can see the positive change that the President’s dedication had brought to the country.

“We have made significant starts, pioneered initiatives, and accomplished impressive milestones as a nation during the first half of the Duterte Administration,” Medialdea said.

“He presents his words with great resolve and confidence, sometimes with good humour, but all the time with the compassion of a father to our nation,” Andanar said.

Cabinet Secretary Karlo Nograles likewise assured that the government will continue to work hard to lift more Filipinos out of poverty.

“His legacy will be defined in terms of how much better peoples’ lives have become and how much government services are supporting the people to ensure that they will never be poor again,” Nograles said.