MANILA, Philippines — The Philippine Airlines (PAL) has cautioned the public against a bogus advertisement circulating online that baits netizens into joining a supposed contest to win plane tickets.

In an advisory on Thursday, PAL said the fake advertisement, which shows the airline’s logo and a “Home in the Sky” phrase.

“Please be advised that a fake advertisement is circulating online luring netizens to reply to several questions in exchange for a chance to win plane tickets,” read the advisory. 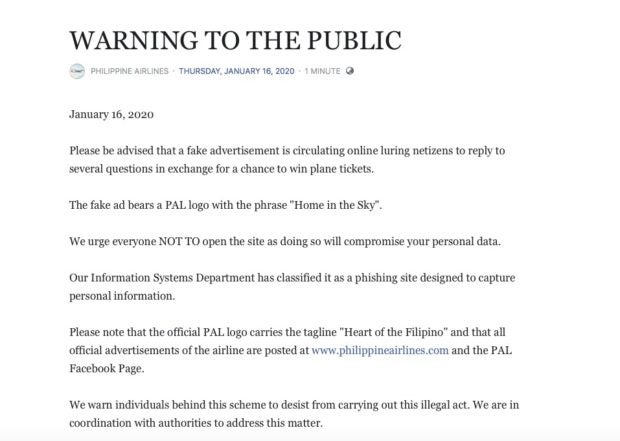 PAL said their Information Systems Department dubbed the advertisement as a “phishing site” that is being used to access personal data.

“We urge everyone NOT TO open the site as doing so will compromise your personal data,” it said.

The management also reminded the public PAL’s official logo bears the tagline “Heart of Filipino” while all official advertisements and promos are published at www.philippineairlines.com and PAL’s official Facebook page.

PAL then warned those responsible for the fraudulent scheme to stop spreading false advertisements online.

“We are in coordination with authorities to address this matter,” the flag carrier said.