Taal’s horses: Only 43 of 3,000 were ferried off dangerous island 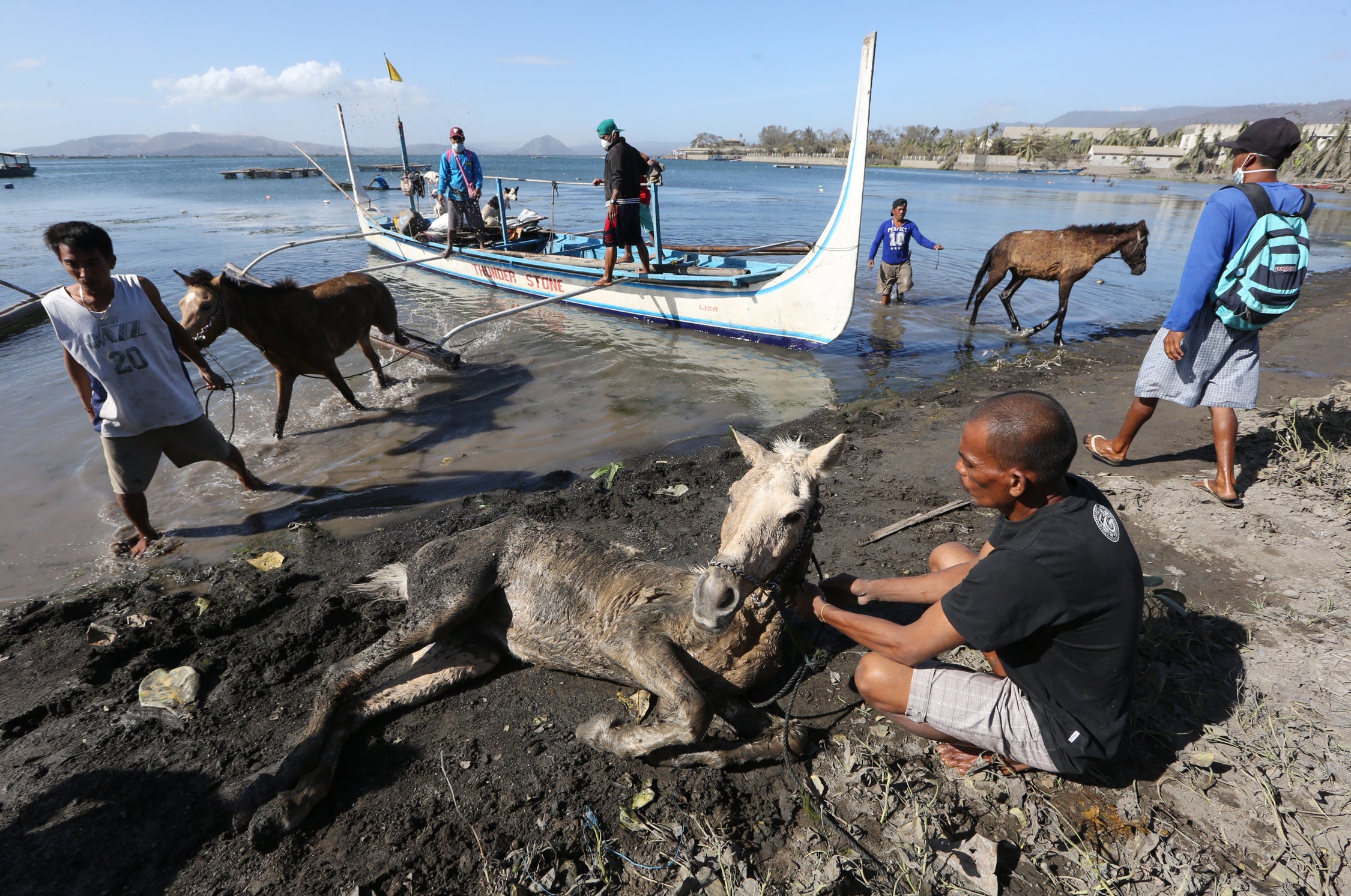 Forty-three of 3,000 horses trapped on Taal Volcano Island were saved before the government declared it a “no man’s land,” throwing the fate of the remaining animals into doubt, despite efforts of animal welfare organizations to rescue them.

Forty-three of 3,000 horses trapped on Taal Volcano Island were saved before the government declared it a “no man’s land,” throwing the fate of the remaining animals into doubt, despite efforts of animal welfare organizations to rescue them.

Cabrera said officials called an emergency meeting that day with animal welfare organizations, public and private veterinarians and other local and international groups to coordinate their efforts, putting an end to chaos that marked rescue efforts on previous days when the groups struck anywhere they were needed.

Batangas Vice Gov. Mark Leviste pledged his sprawling personal property in Lipa City for use as temporary shelter for rescued animals. Though no exact size was given, Cabrera said the “huge” land stretched for “hectares and hectares.”

Veterinarians were assigned to various areas to ensure they could provide immediate first aid to animals in need of medical attention.

“This is unlike the last few days when we had to bring animals all the way back to Quezon City for our own veterinarians to take a look,” Cabrera said. “Now we can go in, get an animal, take it to a staging area, then go back and find more.”

Paws is one of several groups, including People for the Ethical Treatment of Animals (Peta), that have swooped down on the Taal region to tend to pets, poultry and farm animals left behind by their owners who fled the villages when Taal suddenly came to life on Sunday.

“It’s very difficult because we’re running against time,” said Cabrera, who pointed out that duplicate efforts would complicate their ability to rescue as many animals as possible. “There’s now a plan for the animals to also be part of the evacuation.”

In a statement on Facebook, Paws said the animals it had seen were “weak from hunger and dehydration,” because ash from the volcano had wiped out grass and crops.

Up to Wednesday, however, most of the groups were working without assistance from the government. Three Peta volunteers were left briefly stranded on Volcano Island on Wednesday morning as they tried to save animals there.

Cabrera said the Coast Guard rescued the volunteers on the same day.

Paws said the owners of the stranded horses used “three to four wooden boats and rowed over 50 kilometers” to bring the animals to safety at Balete town in Batangas.

As residents were evacuated from Balete, too, Cabrera said the horses were transferred by truck to the Lipa City Veterinary Office on Wednesday night along with seven cows, three carabaos, five goats and one pig.

“The success of the sudden evacuation provided a glimmer of hope for some of the horse owners who said there were still animals left alive on Taal Volcano Island,” Paws said in a Facebook post on Thursday.

It was the first large-scale transfer of animals rescued from the danger zone since the eruptions that began on Sunday.

Animal rights organizations had complained that the military initially prohibited residents from taking animals with them, with Cabrera lamenting that Paws has long called for disaster response plans that have provisions for animals.

Read Next
Navy ship detects US sub off Palawan
EDITORS' PICK
IATF to LGUs: Issue ordinances vs attacks on frontliners, COVID-19 patients
Quick chat with Nicole Andersson: ‘You really don’t need much to be happy’
Robredo spox thanks Duterte for defending VP’s efforts vs COVID-19
Diokno to Duterte: OK to make fun of buck tooth, but focus on people’s needs first
Nograles: Cabinet members to donate 75% of monthly salary to aid COVID-19 fight
10 Filipinos positive for COVID-19 in UK, 7 in Ireland — envoy
MOST READ
Coronavirus hotbed Rizal to shut borders on April 6
Gov’t mulling quarantine period extension of 15-20 more days
Sotto on Isko Moreno’s call: We do our job without the media following our every move
‘Money Heist,’ ‘Tales from the Loop,’ ‘Killing Eve,’ ‘Never Have I Ever,’ ‘After Life’: Five not-to-be missed series this April
Don't miss out on the latest news and information.