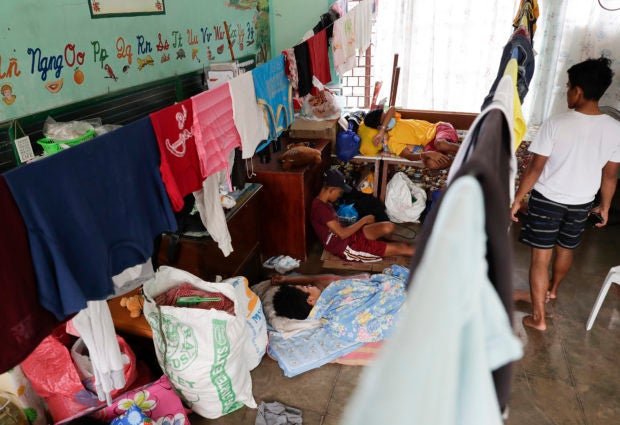 Evacuees from active volcano Taal rest at a school in Santa Teresita, Batangas province, southern Philippines on Thursday Jan.16, 2020. Taal volcano belched smaller plumes of ash Thursday but shuddered continuously with earthquakes and cracked roads in nearby towns, which were blockaded by police due to fears of a bigger eruption. (AP Photo/Aaron Favila)

MANILA, Philippines–Senator Christopher Lawrence “Bong” Go led the distribution of relief and financial aid to the victims affected by the Taal Volcano eruption during his visit at the Department of Health (DOH) Rehabilitation Center, Barangay Kaybagal South, Tagaytay City on Thursday, January 16.

(I brought food packs, sleeping mats, blankets for all of you. Things in your homes can be replaced, what is important is that no one got hurt. Let’s help each other.)

(Executive Secretary Salvador Medialdea also sent assistance from the Office of the President that would be helpful for the evacuees, something for them to buy food.)

The Office of the President turned over financial assistance to affected local government units (LGUs) to help them respond to the needs of their constituents. Go also echoed the Duterte administration’s firm commitment to provide continued support for immediate recovery and rehabilitation of affected areas.

The senator also said that some individuals have already committed to donate horses as livelihood assistance, especially for residents in Tagaytay City who lost horses they use to earn a living due to the effects of the eruption.

Senators Francis Tolentino and Ronald “Bato” dela Rosa, who both reside in Cavite, joined Go and Medialdea during the visit and have also provided their own assistance to the victims.

Senator Go also said that he has brought face masks for the residents after an advisory from the health department urging those affected by the ash fall to protect themselves from its health hazards.

“Meron din po akong dalang masks, iiwan ko dito sa evacuation center para magamit niyo rin [I also have facemasks for you, I’ll leave it here at the evacuation center so there is something you can use],” Go said, as he also warned stores that overprice face masks.

(To the stores taking advantage of the situation, this is not the right time to exploit Filipinos. We should arrest and charge these enterprising people. To be honest, the masks I brought here came all the way from Davao. What you are doing is not helping us. Have some conscience.)

Go was also joined during the visit by representatives from concerned government agencies to provide additional assistance to the disaster-stricken Filipinos, including the Department of Social Welfare and Development (DSWD), Presidential Commission for the Urban Poor (PCUP), and the Department of Trade and Industry (DTI), each with their own specific assistances for the victims.

(The DSWD will be distributing financial assistance, all families here will be getting something. The DTI on the other hand will be providing livelihood assistance. PCUP brought hygiene kits.)

The senator also encouraged the residents, especially those who are injured or in need of medical attention, to go to the nearest Malasakit Center so they can avail of government assistance for their health care needs.

(For those who have injuries that need immediate medical assistance, just approach the nearest Malasakit Center. They have designated express lanes for senior citizens and PWDs.)

Asked on what measures he is advocating to improve the country’s disaster preparation, management and mitigation efforts, Go said that he will continue to push for the creation of the Department of Disaster Resilience (DDR).

(So we can have a specific department that will handle situations during times of calamity. If we have DDR, there will be a cabinet level official who will take charge in disaster preparedness, response and mitigation. Me and my colleagues at the Senate, meanwhile, will do everything to help the victims of the volcano eruption.)

Go added that he has filed a measure mandating the establishment of safe, permanent and dedicated evacuation centers throughout the country.

(One of the measures I filed is the proposal to set up a permanent evacuation center in our country. This is also the priority of President Rodrigo Duterte.)

(Look at our fellow countrymen, they are now staying in schools instead of a proper evacuation center. Schooling of the children are affected because we are using their classrooms. Also, there is no proper sleeping area and comfort room for them to use everyday.)

Go filed during the last quarter of 2019 SB 1228, also known as the Mandatory Evacuation Center Act, which will require every city, province and municipality to construct such centers that will be equipped with emergency packs, medicines and other basic necessities.

(I’ve already filed this in the Senate. Evacuation centers should be established per province because per region is not enough.)

Go also informed the residents that the President will return to the affected areas on Monday to further assess their situation and identify their needs.

(The President will be going back on Monday to inspect those affected places he haven’t visited yet. He told me to find the community that is closest to Taal so he can pay them a visit.)

Ending his message, Go then sympathized with the victims, saying that his office is always open to help them and listen to their concerns.

(There is nothing more we can ask from our Lord. Because He has already given a lot. We are just giving back to the people the public service they truly deserve.)

(You will be assured that I will be your friend in the Senate. Whatever help we can give, do not hesitate to approach men. Do not look at me as a senator, just treat me as one of your neighbor o companion providing service to our fellow Filipino.)

After his visit to Tagaytay City in Cavite, Go also went to an evacuation center in Bauan, Batangas where victims from nearby towns were evacuated to provide assistance and address their concerns.