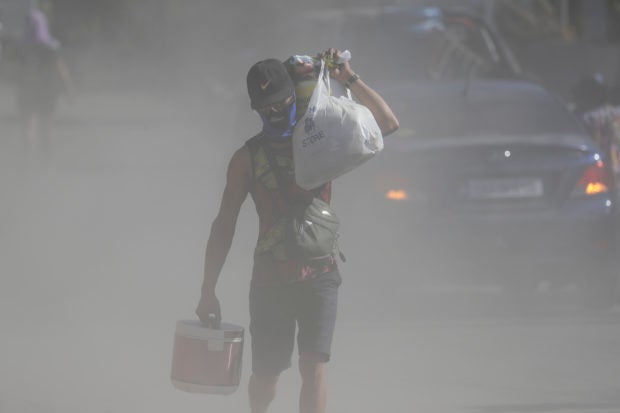 A man walks with his belongings through clouds of ash kicked up on a road as authorities enforced total evacuation of residents living near Taal volcano in Agoncillo town, Batangas province, southern Philippines on Thursday, Jan. 16, 2020. Taal volcano belched smaller plumes of ash Thursday but shuddered continuously with earthquakes and cracked roads in nearby towns, which were blockaded by police due to fears of a bigger eruption. (AP Photo/Aaron Favila)

MANILA, Philippines — The Philippine Institute of Volcanology and Seismology (Phivolcs) said Thursday that Taal Volcano’s activity must exhibit a waning trend before they consider lowering its risk status.

(The important thing before standing down on the alert level is there should be a definite trend that the volcano is waning.)

He also said that as a standard operating procedure for all volcanoes, they implement a two-week period of observation before they lower its alert status.

(But, of course, we also adjust once we make sure that the trend of the volcano’s activity is weakening.)

(We’ll discuss it while we analyze the trend.)

With this, they have started to receive additional data on volcanic quakes that will give them an idea of whether Taal Volcano’s energy is diminishing.

(We didn’t receive any transmission from our Taal Volcano Network for many days. They have just been revived so we still need to back-process them.)

Phivolcs also said earlier that they will seek assistance from partner international space organizations for additional satellite data on the current behavior of Taal Volcano.

Meanwhile, Bornas pointed out that as of Thursday evening, Taal continues to exhibit signs of a possible explosive eruption, hence, Alert Level 4 stays.

The continuous volcanic quakes, emission of a high amount of sulfur dioxide, and the bulging of the Taal region are manifestations of a high volume of magma beneath the volcano’s edifice.

In addition, government volcanologists also noted a further receding of water in Taal’s Main Crater Lake, which, according to Solidum, could be because it is seeping beneath the volcano and is being vaporized as steam.

On Wednesday, Phivolcs reported a “generally weaker” activity on Taal’s main crater, an observation that continued until Thursday.