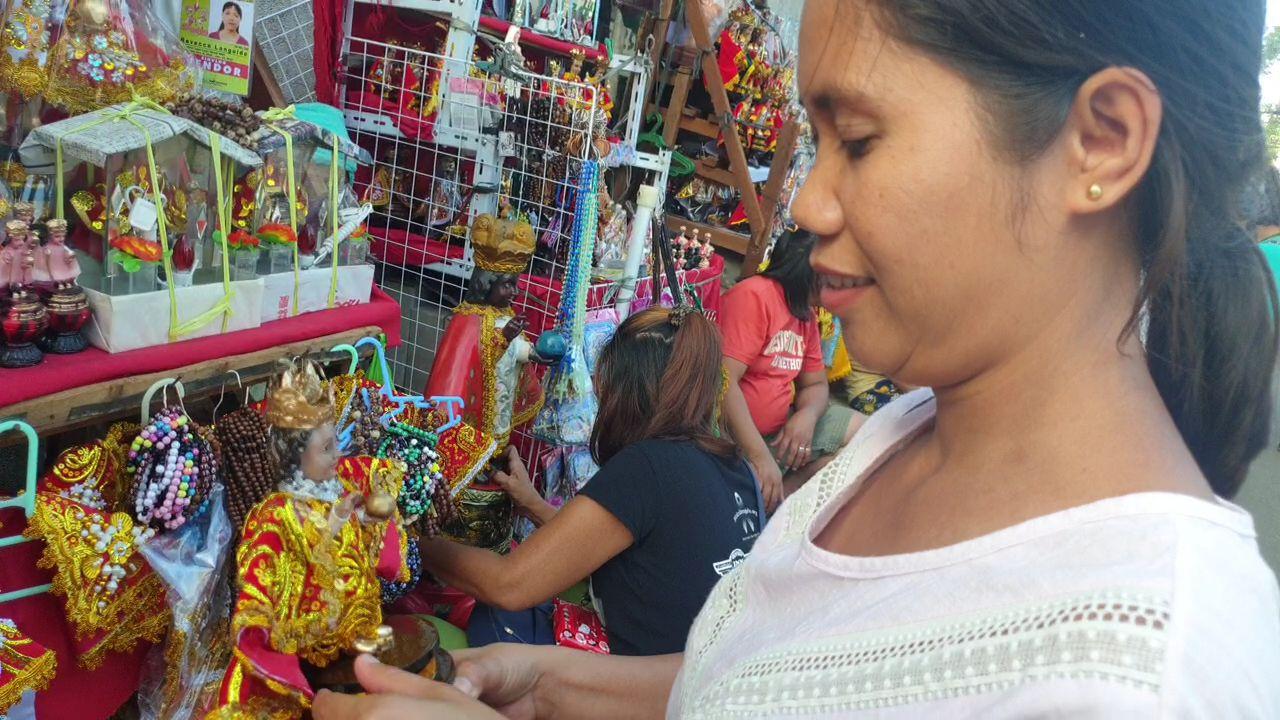 CEBU CITY –– As some devotees already have their prayers for the Santo Niño answered, others are still hoping that in time theirs too will come.

For 37-year-old devotee Joanna Advincula, her engagement with her Australian boyfriend was an answered prayer to the Holy Child Jesus.

She said she prayed for the “right man” to come into her life and the Santo Niño has responded. She is now in the thick of preparations for their marriage this year.

Originally from Leyte province, Advincula quit her job in an office and is now a businesswoman in Barangay Ibabao in Mandaue City.

As a devotee, it is her annual “thanksgiving” that she buys new clothes for her three-year-old Santo  Niño image during the Fiesta Señor or the feast of the Santo Niño every third Sunday of January.

She went to one of the Santo  Niño vendors near the Basilica del Sto. Niño in Cebu City with her six-inch image to have it repainted and clothed with new Velcro linen with intricate gold-colored beads as designs around it.

She paid P350 for the new clothes and the repainting of the Santo Niño. Advincula was all smiles after seeing the Holy Child with his new red cape and look.

While attending one of the nine-day Novena Masses, Advincula had her Santo  Niño image repainted and clothed with vendor Marian Dahuya who is also a devotee of the Holy Child Jesus.

Dahuya’s prayer as a vendor, however, was to earn an extra income for her family of five children, who rely on selling religious images and refurbishing them with new clothes.

But her prayer to have more sales this year was quite evasive. In 2018, she earned some P6,000 per day. This year, however, she barely made a thousand pesos a day, just enough for her family’s daily needs.

She badly needs to earn more and prayed to the Santo Niño so that she can pay the P70,000 cash she borrowed, to buy Santo  Niño products for her tiny stall near the Basilica del Santo Niño.

Dahuya and her husband from Labangon, Cebu City have been vendors at the basilica for around eight years now. This year, she said, they had very low sales.

A fellow vendor, 53-year-old Revecca Languido, traveled 59 kilometers with her husband from Barili town in southern Cebu. They come to Cebu City as devotees and as street vendors of religious images.

Just like Dahuya, the Languidos said they have very low sales this year. They believe it is because the basilica vendors are already saturated, and their stalls are often inaccessible.

The Languidos have a 20-year tradition to come to the basilica in Cebu City during the annual fiesta as vendors.

Devotees can buy Santo  Niño images for at least P50 and P100 for the smallest statues, while the biggest one costs up to P3,000. The vendors also sell scapulars, rosaries, rosary bracelets, and other religious items ranging from P20 to P50.

If devotees want refurbishing and new clothes of the Santo Niño, the price ranges from P200 up to P1,500 depending on the size of the image.

While both Dahuya and Languido are complaining about their low sales this year, they never lose hope and continue to pray to the Santo  Niño for blessings in the coming days, especially during Sinulog on January 19.

Vendors expect the bulk of the devotees to come this Friday, Saturday, Sunday, and even the day after the Sinulog when visitors buy souvenir items.

“We just hope and pray that there will be more blessings when the weekend comes,” Dahuya said./lzb