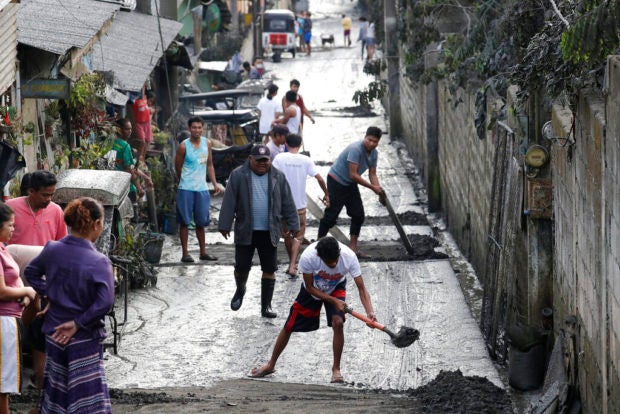 Residents clean ash outside their homes as Taal Volcano still spews ash on Monday, Jan. 13, 2020, in Tagaytay, Cavite province, south of Manila, Philippines. The small volcano near the Philippine capital that draws tourists for its picturesque setting in a lake erupted with a massive plume of ash and steam Sunday, prompting the evacuation of tens of thousands of people and forcing Manila’s international airport to shut down. (AP Photo/Aaron Favila)

The Philippine Atmospheric, Geophysical, Astronomical Services Administration (Pagasa) explained that areas like Agoncillo, Lemery, Laurel, and Taal may be affected if the volcano’s ash column is less than seven kilometers.

However, Pagasa also said the scope would be broader if Taal’s ash column goes beyond seven kilometers since an opposite wind direction will blow the ash to another part of Batangas province. In this scenario, towns in the eastern parts of the province, such as Cuenca, Balete, San Jose, and Mataas na Kahoy may be likely affected by ashfall.

Pagasa said Marinduque, Quezon, and some Mindoro provinces may possibly be affected with an ash column of more than seven kilometers.

(That’s why those areas in the west-southwestern part of Batangas may possibly be affected. But if Taal’s ash would be above seven kilometers, the wind will shift to the northwest direction.)

(So it is possible that eastern-southeastern portions of Batangas, even Mindoro provinces, Marinduque, and as far as Quezon, may be affected by ashfall. That’s why we encourage the public to continuously take caution and monitor updates of Phivolcs.)

Taal Volcano emitted a huge column of ash, steam, and volcanic rocks in what volcanologists called a phreatic eruption or steam-driven episode on the afternoon of January 12. This caused heavy ashfall in several Batangas towns as well as its surrounding provinces and regions such as Metro Manila and Central Luzon.

Although Taal Volcano appeared to have lulled in the last couple of days since the phreatic eruption, the Philippine Institute of Volcanology and Seismology has kept Alert Level 4 over the second-most active volcano in the country, saying a fiery explosion is still imminent within hours or days.