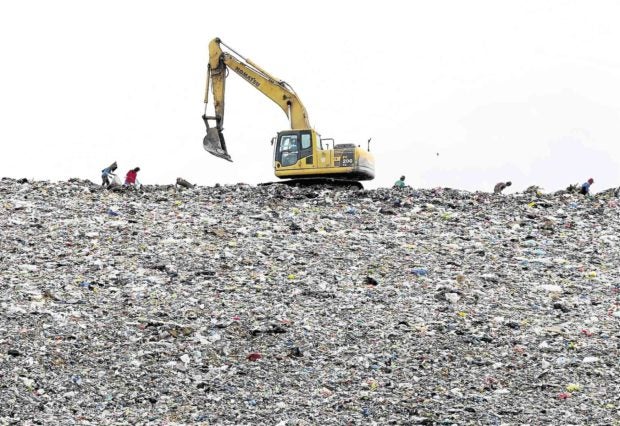 The Payatas landfill in Quezon City has a dark history that environment officials don’t want to be repeated. Philippine Daily Inquirer File/LYN RILLON

MANILA, Philippines — Relatives of victims in the infamous Payatas tragedy in July 2000 have lost their bid to each claim P3 million in damages from the Quezon City government.

In a 133-page decision, the Quezon City Regional Trial Court instead awarded P110,000 in damages to each of the heirs of the 57 victims.

Originally, the petitioners were asking for actual and compensatory damages worth P500,000; moral damages, P500, 000; and exemplary damages not less than P2-million for each death.

The court also ordered the payment of P100,000 in attorney’s fees.

According to the court, it cannot award actual damages because the 57 plaintiffs failed to produce documentary evidence that the victims owned properties that were destroyed by the trash-slide.

It added that no one also testified regarding the amount incurred for the wake and burial of the fatalities.

“Although the plaintiffs enumerated their respective real and personal properties buried by the thrash slide, none of them were able to produce documentary evidence that indeed such properties existed prior to and at the time of the tragedy. Furthermore, no plaintiff testified as to the amount they incurred for the wake and burial of the deceased victims,” the court ruled.

“Bare allegations, unsupported by proof of the victims’ earning capacity cannot merit the award of the same. For loss of income due to death, there must be unbiased proof of the deceased’s average income,”  it added.

The Payatas tragedy happened on July 10, 2000, burying over 200 people under an enormous pile of garbage.

In holding the Quezon City government liable, the court said: “The mountain-like thrash in itself is a testament of the city government’s gross negligence in the management and operation of the dumpsite.”

“Had they exercised due care expected of them, they could not have allowed the garbage to rise to such unprecedented height as to resemble several Meralco posts arranged on top of each other or several storeys-high of a building,” the decision issued by Branch 97 Acting Presiding Judge Marilou Runes-Tamang also reads.

“Consequently, the defendant City Government of Quezon City’s omission and negligence in not maintaining an adequate and suitable facility for solid waste disposal caused damage to both life and property of the persons living in the area,” Tamang added.

During the time of  Mayor Brigido Simon Jr., specifically on October 13, 1999, certificates were awarded to Payatas settlers.

“As indigents, the plaintiffs and the deceased victims relied on this piece of paper as their hold to the small portion of land on which they built their houses. They cannot be blamed for their indigency and unfamiliarity with the existing rules on community mortgage program; they cannot be blamed if they relied on the acts of then Mayor Simon Jr.,” the ruling reads.

The court held that the city government cannot claim that plaintiffs should be blamed for the misfortune they have encountered for their refusal to be relocated to safer places.

It said that negligence of the city government for failing to maintain an adequate and suitable facility for solid waste disposal was the “proximate cause of the loss of lives and properties.”

Read Next
Sotto: SC petition has no effect on bills extending ABS-CBN franchise
EDITORS' PICK
BAP: PH banks can withstand ABSCBN shutdown
World-standard accounting: Unlocking your financial potential
Early to tell if PH has reached ‘peak’ of COVID-19 outbreak — WHO exec
Water remains our saving grace right now
Defend Your Health! Shop health essentials from home with Rose Pharmacy’s Online Sale
DTI: Restaurants’ dine-in capacity to further expand, LGUs encouraged to move curfew time
MOST READ
Enchong Dee to Harry Roque for saying ‘move on’ from ABS-CBN shutdown: ‘You disgust me’
US rejects nearly all Chinese claims in South China Sea
Defensor: ‘No problem’ with daughter expressing support for ABS-CBN
‘I am not my father,’ says daughter of lawmaker who voted to deny ABS-CBN franchise
Don't miss out on the latest news and information.