P136M worth of ‘shabu’ seized in Sorsogon port 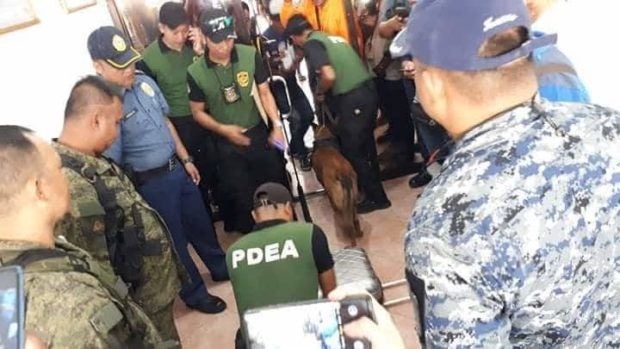 Authorities crowd around a grey suitcase taken from two passengers bound for Visayas via the Matnog port in Sorsogon as a PDEA agent opens it to find 20 kilos of drugs worth over P100 million crammed inside. Contributed photo

LEGAZPI CITY –– Two alleged drug pushers were caught with P136 million worth of suspected “shabu” (crystal meth) inside a suitcase on Thursday morning by the Philippine Drug Enforcement Agency (PDEA) at the Matnog port in Sorsogon province.

PDEA operatives confiscated from the suspects shabu with a combined weight of about 20 kilos placed inside a gray suitcase.

Talento said the suspects were bound for the Visayas.

The suspects were detained at the PDEA custodial facility in this city and will be charged with possession of illegal drugs under the Comprehensive Anti-illegal Drug act. The confiscated items were also taken in custody of PDEA Bicol Region.