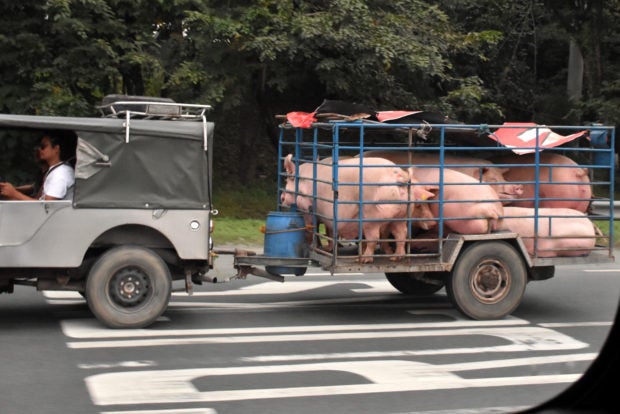 HOG TRADE Trading of live hogs continues as the government lays down measures to prevent the spread of the African swine fever virus. —WILLIE LOMIBAO

In Pangasinan and Bataan provinces, more than 21 pigs had been culled after random blood samples from hogs raised in some backyard farms tested positive for the swine disease.

Tarlac Gov. Susan Yap on Wednesday confirmed that there were ASF-infected hogs in this capital city and the towns of Victoria, Capas, Concepcion and La Paz.

Yap cited the confirmatory results from the regional animal disease diagnostic laboratory, which conducted the blood tests of samples taken from semicommercial and backyard raisers in Tarlac.

Dr. Ma. Lorna Baculanta, the provincial veterinarian, said she had asked agriculture officers in the affected areas to implement a “1-7-10” quarantine protocol.

Under this setup, hogs within a 1-kilometer radius of the infected area are culled even if they are unaffected by the disease. Those within the 7-km radius are placed under surveillance while those within the 10-km radius will undergo mandatory monitoring.

In Gerona town, also in Tarlac, a pig from a backyard raiser in Barangay Bawa died last week and a blood sample was taken from it after it manifested symptoms of ASF. Gerona Mayor Eloy Eclar said they were waiting for the confirmatory test result. He said he had formed a task force and ordered officials to set up quarantine checkpoints to prevent ASF infection in the town.

In Binmaley town, Pangasinan, 21 hogs in Barangay Linoc were culled on Tuesday after blood samples were tested positive for ASF. Authorities also monitored four villages within a 1-km radius of Barangay Linoc where quarantine checkpoints had been set up.

He said the hog raiser only reported the incident to authorities after the pigs had been buried.

In Bataan, blood samples from some pigs in the towns of Dinalupihan and Hermosa also tested positive for ASF, local officials confirmed on Wednesday.

The laboratory tests were done after several hogs from villages in the two towns died recently.