Duterte urges Taal evacuees not to return home yet 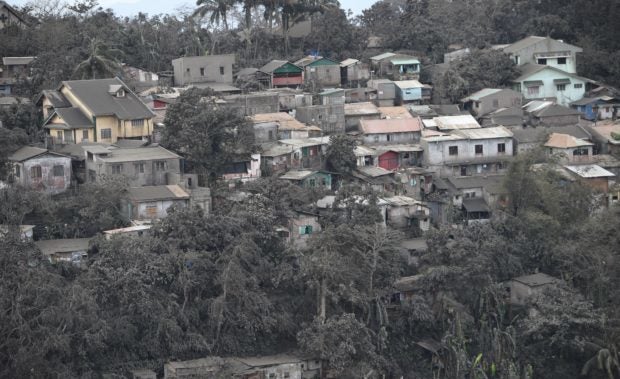 A general view of houses with roofs covered with ash, spewed by Taal Volcano in Tagaytay City on Jan. 14, 2020. (Photo by TED ALJIBE / AFP)

BATANGAS CITY, Philippines — President Rodrigo Duterte on Tuesday cautioned evacuees against going back to their homes as Taal Volcano continued to spew plumes of ash and lava fountains with swarms of earthquakes regularly shaking the ground.

“No one will return home yet. Nobody is allowed to go there, to go back until such time that you’re safe,” Duterte, speaking partly in Filipino, said in a speech before evacuees in this city.

More than 30,000 residents of Batangas and Cavite had earlier been evacuated after Taal Volcano, which is in Batangas, spouted a giant ash column into the sky on Sunday afternoon.

Authorities raised Alert Level 4 over the volcano, meaning that an “explosive eruption” is imminent.

Alert Level 5 is the highest, indicating an eruption is taking place.

Duterte visited some 3,500 evacuees temporarily taking refuge at the Batangas City Sports Complex after a situation briefing with government officials regarding the eruption of the volcano.

The President, together with some Cabinet officials, handed out assistance to the evacuees who came from areas around the volcano.

They were given P3,000 cash per family and food packs. The Department of Agriculture also extended P130 million worth of assistance.

Duterte said the aid should help affected residents to get back to the normalcy of life.

“Don’t delay it. As soon as it comes and is implemented, go back to your normal life immediately. That’s what you should do,” he said.

Read Next
Duterte echoes Quiboloy: ‘Itong mga droga, stop!’
EDITORS' PICK
Diokno to Duterte: OK to make fun of buck tooth, but focus on people’s needs first
Nograles: Cabinet members to donate 75% of monthly salary to aid COVID-19 fight
Robredo spox thanks Duterte for defending VP’s efforts vs COVID-19
Quick chat with Nicole Andersson: ‘You really don’t need much to be happy’
10 Filipinos positive for COVID-19 in UK, 7 in Ireland — envoy
IATF to LGUs: Issue ordinances vs attacks on frontliners, COVID-19 patients
MOST READ
Sotto on Isko Moreno’s call: We do our job without the media following our every move
ADB warns PH against prolonged lockdown
Cook more and eat less: Tips on your quarantine diet
Duterte fires PACC’s Luna for urging NBI to probe Robredo
Don't miss out on the latest news and information.

6 PH hospitals to receive FDA-approved test kits from UP