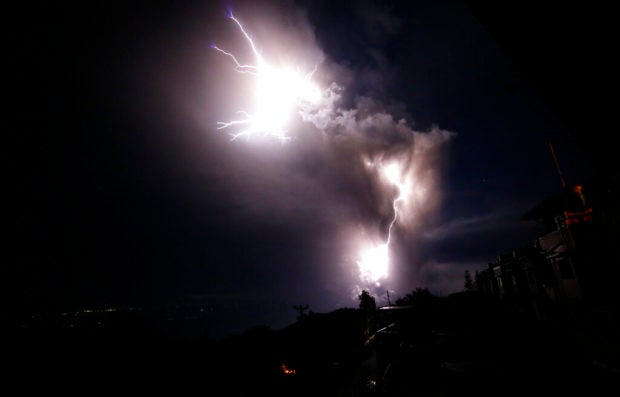 Lightning strikes beside the ash cloud as Taal Volcano erupts on Sunday, Jan. 12, 2020, in Tagaytay, Cavite province, outside Manila, Philippines. A tiny volcano near the Philippine capital that draws many tourists for its picturesque setting in a lake belched steam, ash, and rocks in a huge plume Sunday, prompting thousands of residents to flee and officials to temporarily suspend flights. (AP Photo/Aaron Favila)

MANILA, Philippines — While Taal Volcano appeared to be slackening Tuesday, the Philippine Institute of Volcanology and Seismology (Phivolcs) warned residents against feeling a “false sense of security” and returning to their homes.

Phivolcs stressed residents should not even think of going back to their places as its director, Rene Solidum, explained there is more to Taal’s internal activities than what is being seen by people on the surface.

(I want to emphasize the difference between what we visually see on the volcano’s activities and what is happening beneath. One may say that it has weakened, turning it into a false sense of security that’s why some residents still return to their homes.)

Solidum said the reported fissures or cracks in areas around Taal are signs of magma continuing to rise that could lead to the volcano’s major eruption.

(Due to the rising of magma, we are now having incidents of fissures. It means there is pressure causing the earthquakes and cracks. It means that the volume of magma is rising, which could supply Taal’s eruption.)

After Taal Volcano’s phreatic eruption or steam-driven episode on January 12, thousands were forced to evacuate their homes.

Taal Volcano remains under Alert Level 4, which means that a hazardous explosive eruption is possible within hours or days.