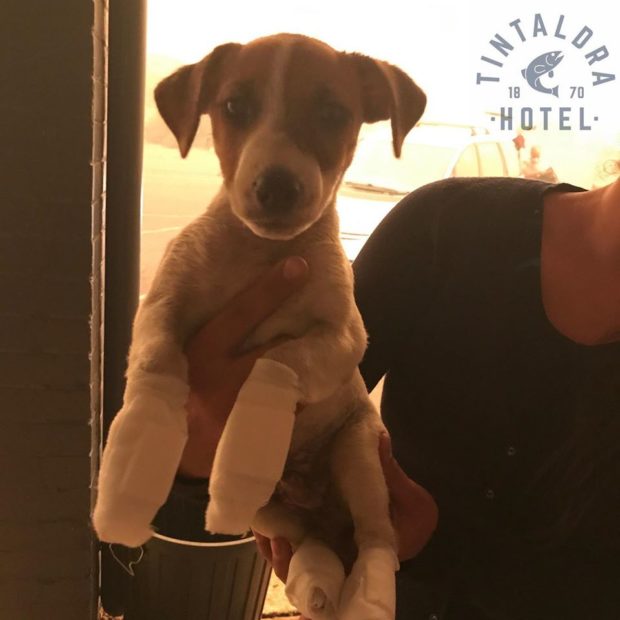 A man is being hailed a hero after he helped a puppy recover from burn injuries after it lost its home to the bushfires in Australia.

Sparky’s owners were watching a fire from their home on the outskirts of the town of Tintaldra on Jan. 4, when things took a turn for the worse, as per The Australian on Jan. 8.

When the flames suddenly swept toward their home, fire officials arrived and urged Carolina Wild, her husband Michael, her brother and kids–Summer, 2, and Logan, 4–to evacuate.

“We got in the car, and when we got out and passed the firemen I go, ‘Oh, the dog’,” Carolina was quoted as saying.

“We can’t go back, not with the kids,” Michael replied, after seeing the flames getting stronger. “It’s finished.”

According to the report, the Wilds’ residence had been burned down within minutes. After evacuating, the family stayed in a nearby hotel while their father and Carolina’s brother helped keep the flames at bay.

The morning after, the family returned to their burned home, with Michael stating that the “house is like a bomb went off, everything was black.”

“He ran off and must have found one good hiding place!” Tintaldra Hotel, where the Wilds were staying in, said in its Facebook post on Jan. 6.

The family who stayed here on Saturday night with their children, couldn’t find their puppy when they vacated their…

They immediately brought Sparky to the hotel, where its owner, Darren Jones, treated the puppy’s burn injuries.

“He had burnt whiskers and burnt feet, so we got him back here and put his feet in some cold water,” Jones said in the report. “We got some burn gel and wrapped him up, and he’s all right.”

Amid the ongoing bushfires affecting Australia, the hotel owner noted that the puppy’s story was “just what people need.”

“Instead of just seeing ­tragedy after tragedy,” he explained, “they need to be reminded that there’s a bit of hope out there.”  Ryan Arcadio /ra