MANILA, Philippines — The Department of Health (DOH) on Tuesday warned the public against buying and consuming fish from Taal Lake and nearby Batangas province, saying it could pose danger to one’s well-being.

This advisory came two days after Taal Volcano had a phreatic eruption, belching ash, steam, and small rocks into the sky and consequently, heavy ash fell over the area as well as surrounding provinces or regions, including the National Capital Region.

(Definitely, we have an advisory that any fish coming from the area of Taal and Batangas should not be bought. We cannot expect its safety to our citizens.)

Should one accidentally eat fish sourced from Taal Lake and Batangas province, Laxamana said among symptoms that should be watched out for are stomach pain, vomiting, and diarrhea. 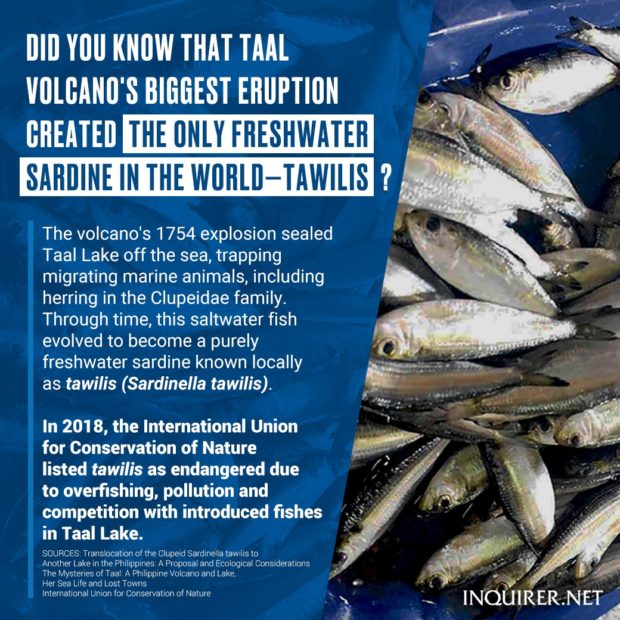 (Now, if for example there’s the chance that a person ate or wants to really eat Tawilis from Taal Lake, there are symptoms to look out for.

(As to the symptoms for those who may have ingested the fish from there, possibly dead fishes already, some of the symptoms include stomach ache, vomiting, and diarrhea. Those are the symptoms that need to be addressed.)

Those who will experience vomiting and diarrhea are strongly advised to rehydrate, Laxamana said.

(The number one thing to do is to rehydrate and monitor patients who may have consumed dead fish or fish that has sulfur or whatever chemicals or minerals ingested by the fish.)

Taal Volcano remained under Alert Level 4, which means that “hazardous explosive eruption is possible within hours to days.”