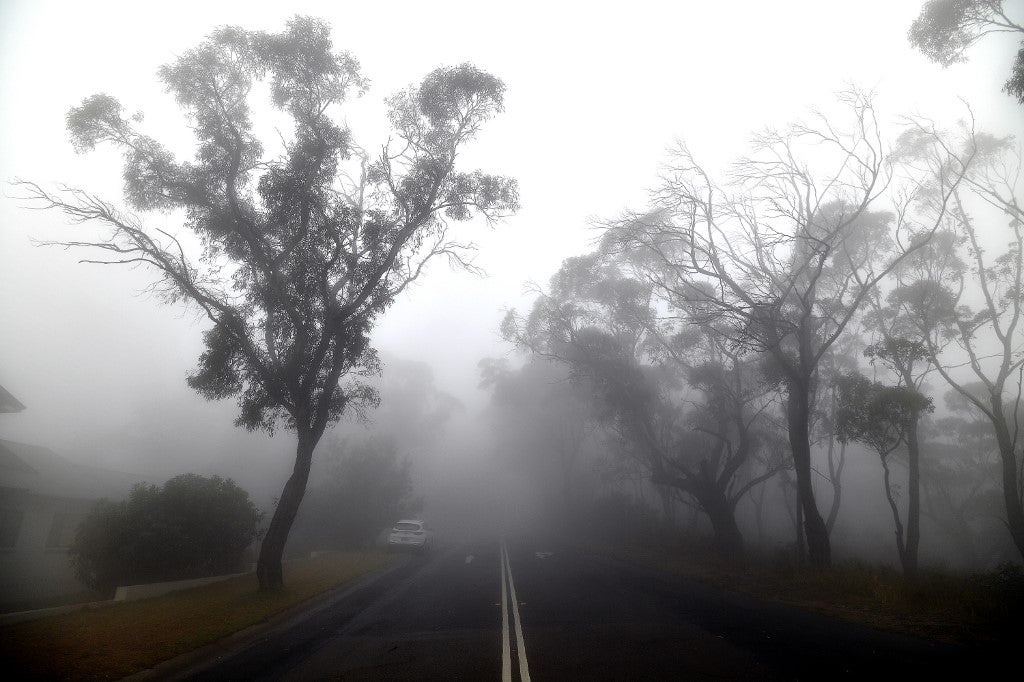 Thick fog mixed with bushfire smoke fills the sky in the Ruined Castle area of the Blue Mountains, some 75 kilometers from Sydney, on January 11, 2020. – Massive bushfires in southeastern Australia have a “long way to go”, authorities have warned, even as colder conditions brought some relief to exhausted firefighter and communities. (Photo by SAEED KHAN / AFP)

SYDNEY, Australia — Forecasts of heavy rain offered hope Tuesday in the months-long battle to contain Australia’s unprecedented bushfires, but smoke lifted pollution levels in the nation’s second biggest city to among the worst in the world.

Cool weather over recent days has already given some respite for exhausted firefighters spread out across vast swathes of the country, with some of the biggest blazes now brought under control.

Optimism was further boosted on Tuesday with heavy rain forecast for some of the hotspots in the most populated eastern states of New South Wales and Victoria.

“We’ve been talking about it for months now, that January might see the first fall of decent rain, and that looks like what’s coming along over the next few days.”

However, dozens of fires remained out of control and, with many weeks of hot weather still expected throughout Australia’s summer, there was no suggestion the crisis would end soon.

Toxic smoke from the blazes also blew overnight into the Victorian capital of Melbourne, which is due to stage the Australian Open tennis tournament next week.

Pollution in Melbourne, which is normally ranked as among the world’s most liveable cities, was rated “hazardous”, with health authorities warning people to stay indoors.

Practice sessions for world number one Rafael Nadal and some of the other big names in tennis were suspended on Tuesday.

Qualifying rounds for the Australian Open were also delayed for a couple of hours, and the organisers’ decision to resume play late on Tuesday morning caused confusion and concern for some players.

Mandy Minella, the world number 140 from Luxembourg, voiced her opposition on Twitter.

“Shocked to see that qualifying matches have started @Australian Open, What about the health of all the people that have to work out there, especially the ballkids?” she tweeted.

Still, the hazy conditions were not expected to last all week in Melbourne, with a change in wind direction and the forecast wet weather over the coming days set to clear the air.

The bushfires have killed at least 27 people, destroyed more than 2,000 homes and burnt 100,000 square kilometers of land — an area larger than South Korea or Portugal.

However climate change and a prolonged drought have contributed to the current crisis, with the blazes starting much earlier than normal and lasting for far longer.

Australia experienced its driest and hottest year on record in 2019, with its highest average maximum temperature of 41.9 degrees Celsius recorded in mid-December.

The fires have prompted an outpouring of donations from around the world to help communities and devastated animal populations.

Environmental groups estimate one billion animals have been killed, many of them unique to Australia.

The country’s environment minister Sussan Ley has warned that in some areas, koalas may have to be reclassified as endangered.

Read Next
Ashfall inside New Bilibid Prison ‘light and manegeable’
EDITORS' PICK
PH study shows 1 in 4 COVID patients at risk for stroke
Climate Change Commission and Nestlé PH to discover sustainability-focused solutions
Work-From-Home is here to stay and requires reliable logistics
SC asked to compel gov’t action vs plastic pollution
Legarda emphasizes role of ICC/IPs in nation building this IP month
Print media group seeks tax breaks
MOST READ
Drivers now required to take driver’s education upon license renewal – LTO
Gordon to Duterte: You? Teaching me courtesy?
Can Marcos Jr. be disqualified?
Marcos Jr’s ‘special diploma’ from Oxford: You can have it, too
Don't miss out on the latest news and information.