BANGKOK – A Chinese visitor to Thailand has been confirmed to be infected with a new strain of coronavirus that has been linked to a pneumonia outbreak in central China, health officials said Monday. 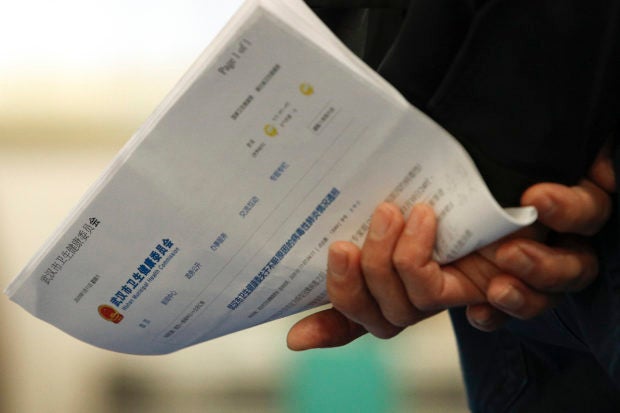 Wong Ka-hing, the Controller of the Centre for Health Protection of the Department of Health holds a Wuhan Municipal Health Commission press statement of the new type of coronavirus, during a press conference at the Health Department in Hong Kong, Saturday, Jan. 11, 2020. Health authorities in the central Chinese city of Wuhan are reporting the first death from a new type of coronavirus. The Wuhan Municipal Health Commission reported Saturday that seven other people are in critical condition. (AP Photo/Andy Wong)

The U.N.’s World Health Organization said Thai officials have reported that a traveler from the Chinese city of Wuhan has been hospitalized in Thailand with the virus.

The outbreak of the virus has been traced to Wuhan, where it affected several dozen people who had been to a major meat and seafood market.

Thai Public Health Minister Anutin Charnvirakul said it appears to be the first confirmed case of the virus found outside China, the Bangkok Post newspaper and other Thai media reported.

He identified the infected tourist as a 61-year-old woman whose symptoms were detected on arrival at Bangkok’s Suvarnabhumi Airport last Wednesday. Her coronavirus was confirmed Sunday by a laboratory test, Anutin said.

She has been treated at an isolation ward at a state health facility outside of Bangkok, and no longer has any fever or respiratory symptoms, he said.

Eight other people with possible symptoms have also been held at the facility, he said, but none has been confirmed to have the virus.

A statement issued Monday by the Geneva-based World Health Organization said it is working with officials in Thailand and China following the report of the confirmed case outside China.

The agency says its director-general is consulting with the agency’s emergency committee, which generally decides whether viral outbreaks merit an expanded response from health authorities.

“The possibility of cases being identified in other countries was not unexpected, and reinforces why WHO calls for ongoing active monitoring and preparedness in other countries,” the agency said. “WHO reiterates that it is essential that investigations continue in China to identify the source of this outbreak and any animal reservoirs or intermediate hosts.”

The virus is not believed to be spread by human-to-human contact.

Officials in Wuhan said over the weekend that a total of 41 people were suffering from pneumonia caused by the new coronavirus and a 61-year-old man had died — China’s first known death from the virus.

China says the cause of the Wuhan outbreak remains unknown but has sought to play down speculation that it could be a reappearance of the SARS epidemic, which killed hundreds in 2002 and 2003.

Coronaviruses are a large family of viruses, some of which cause the common cold. Others found in bats, camels and other animals have evolved to cause more severe illnesses.

Common symptoms include a runny nose, headache, cough and fever. Shortness of breath, chills and body aches are associated with more dangerous kinds of coronaviruses, according to the U.S. Centers for Disease Control and Prevention.