4 Iraqi servicemen wounded by rocket attack on air base

BAGHDAD  – Four members of Iraq’s military were wounded Sunday in a rocket attack targeting an air base just north of Baghdad where American trainers are present, Iraqi security officials said. 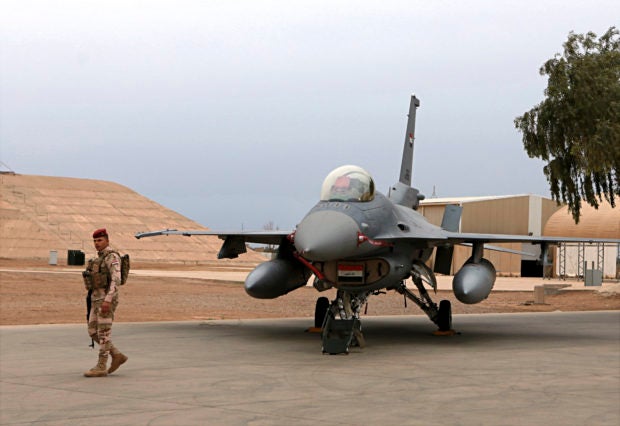 FILE – in this Feb. 13, 2018 file photo, an Iraqi army soldier stand guard near a U.S.- made Iraqi Air Force F-16 fighter jet at the Balad Air Base, Iraq. Iraqi security officials said on Jan. 12, 2020, four members of Iraq’s military have been wounded by a rocket attack targeting Balad Air Base, an air base just north of Baghdad. American trainers and a company that services F-16 aircraft are present at that base. Sunday’s attack by at least six rockets came just days after Iran fired ballistic missiles at two bases in Iraq housing U.S. forces, causing no casualties. (AP Photo/Khalid Mohammed, File)

Recent heightened tensions between the U.S. and Iran were sparked last month when a rocket attack killed an American contractor at a base in Iraq. The U.S. has blamed that attack and others on Iran-backed militias.

No group claimed responsibility for the attack.

The rockets struck Balad air base, which hosts American trainers, advisers and a company that provides maintenance services for F-16 aircraft. Some rockets fell on a restaurant inside the airbase, the officials said.

The base is located some 50 miles (80 kilometers) miles north of Baghdad.

A statement from the Iraqi army’s official media office confirmed the attack but said eight rockets hit the base, and that two officers had been wounded. The difference in accounts could no immediately be reconciled. ‘

There are no Americans currently at Balad base and were none during the the attack, according to a coalition spokesperson.

A defense official said American experts, trainers and advisers had been at the base. The official spoke on condition of anonymity because he was not authorized to speak to media.

The U.S. and Iran recently stepped back from escalating tensions following the killing of Gen. Qassem Soleimani, Iran’s top general, in a U.S. airstrike in Baghdad. A senior Iraqi leader of an Iran-backed militia was also killed.

The limited Iranian strikes appeared to be mainly a show of force, and deescalated tensions that had threatened to turn Iraq into a proxy battlefield.