Are young crusaders and heroes fair game for critics? 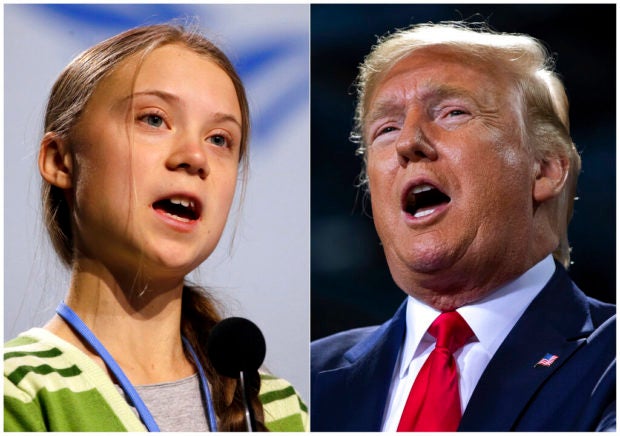 NEW YORK — The point where childhood ends and adulthood begins isn’t as straightforward as it seems. Add the limelight and things can get complicated for young people who either voluntarily or through circumstances live very public lives.

Those public lives often come with heaping helpings of adult-size sniping. But are children and adolescents who find themselves under global microscopes still entitled to age-appropriate protection from the harshness of public discourse? And, more importantly, can they handle it?
Children and teens, in this era of blurred boundaries, have at their disposal mobile megaphones — for the first time in human history — to reach the entire world. That allows them to be heard, and potentially taken seriously, by hundreds of millions of people, all the way up to heads of state who include the president of the United States.

But does it give those who hear them the right to slap back? At what point does the imperative to treat children more gently collide with their decision to enter the marketplace of ideas — and what happens when it does?

In 2012, 16-year-old gymnast Gabby Douglas became the first African American woman — and woman of color of any nationality — to win Olympic gold in the individual all-around. The feat was joyous, but some on social media bemoaned that her hair wasn’t perfect.

The teen clapped back: “Are you kidding me? I just made history. And you’re focusing on my hair?”

When climate activist Greta Thunberg, who just turned 17, was named Time magazine’s 2019 person of the year, President Donald Trump took to Twitter to call her choice “ridiculous,” going on to say: “Greta must work on her Anger Management problem, then go to a good old fashioned movie with a friend! Chill Greta, Chill!”

To that, Thunberg responded by changing her Twitter profile to mock the president’s words. She told The Intercept: “Honestly, I think it’s funny.”

Since Serena Williams was a teen, when Malala Yousafzai won the Nobel Peace Prize after being shot in the face, with the ascent of 18-year-old pop star Billie Eilish and in the aftermath of the mass school shooting in Parkland, Florida, that turned young survivors into gun control activists, the treatment of young people in the public eye has had its ups and downs.

“For anyone who shares public opinions about civic and social issues, like Greta Thunberg and the Parkland teens have done, it can cut both ways. It can be empowering for young people to use their voices in such a public way. Young people can also be especially effective in changing public conversations about important issues. People listen to young people in a different way,” said Dr. Parissa Ballard, a developmental psychologist at Wake Forest School of Medicine in Winston-Salem, North Carolina.

“At the same time, public political engagement can be very stressful and can put young people in a vulnerable position when they receive criticism or people publicly disagree,” said Ballard, whose research focuses on the intersection of civic engagement and adolescent health and wellness.
Students from Marjory Stoneman Douglas High School who began speaking out for gun reform soon after the shooting there were already in a devastating position when they faced accusations that some were “crisis actors” and the group was under the manipulation of gun control advocates.

The teens were unfazed.
“There are people who are going to be putting us down. It doesn’t matter. Everything we’re doing, it can’t be stopped,” Diego Pfeiffer, an 18-year-old senior at the time, told The Miami Herald in February 2018. “We are children and we have a message. They are bashing survivors of a school shooting. You can go ahead, but our message is going to be heard loud and clear.”

Development psychologists prefer to speak of stages when describing life’s slide from childhood into adolescence and on to young adulthood, such as the onset of biological changes and shifts in social roles. Some use more rigid measures, considering childhood to extend through age 12, with adolescence roughly between 12 and 18 and young adulthood the period between 18 and 25.
Richard West, an Emerson College communications professor who focuses on family, bullying and identity, said that’s only part of the story for young people who prematurely find themselves in adult spaces.

“These are individuals who are emotionally driven and passionately obsessed with having a dialogue,” he said. “I don’t feel that they should be held to a standard that we hold, for instance, a president or an ambassador.”

“We all need to jump in. It’s not just Greta’s family. It’s not the Parkland kids’ families. It should be all of us jumping in when we see something or hear something that might be completely out of line with the values of this country,” West said. “We don’t have the value as a country of attacking young people who might be activists.”

Jumping in is exactly what former first lady Michelle Obama did on Twitter after Trump’s “chill” tweet about Greta.
“Don’t let anyone dim your light,” Obama urged Greta. “Like the girls I’ve met in Vietnam and all over the world, you have so much to offer us all. Ignore the doubters and know that millions of people are cheering you on.”

Eilish, who grew popular in 2016 with her SoundCloud single Ocean Eyes, has long been surrounded by family in her entourage, including her parents and her older brother and collaborator, Finneas Baird O’Connell. But fame has had its rough spots nonetheless.

“I forget sometimes that they’re not literally my friends,” she told Variety of her fans. “It’s weird, like, that’s probably the biggest con in it all: that people I’ve never met think I’m really close friends with them. And then they forget that I’m not, and sometimes say stuff at meet-and-greets or post things that are joking or sarcastic about how bad I look in (a certain) photo, and I’m like, wow, that’s so mean. But then I remember that it’s just part of being friends — you make fun of your friends as a joke, and they make fun of you back — so it’s all love, and I really, really don’t want it to change.”
Ballard, too, sees a key role for supportive adults when public young people face detractors, especially those like Greta and the Parkland survivors who are up against grown-ups with immense power and resources.

“Adults can support young activists by helping them understand the range of possible reactions they might get and to help manage their expectations about public political engagement,” she said.

Daryl Van Tongeren, an associate professor of psychology at Hope College in Holland, Michigan, specializes, in part, on questions of morality.
“I think sadly in our society they do sometimes forfeit their childhoods, but I don’t think that they should have to,” he said. “I think as a society we view them as no longer being children and somehow we now have rights to kind of put them in a different realm, put them in a different category. It’s a moment for us to pause and say, just because this is happening, does that mean that it’s good or it’s healthy or it’s right?”

Williams, who is now 38 and owns 23 Grand Slam singles titles, knows some of the issues well.

“People have been talking about my body for a really long time,” she told The Fader in 2016. “Good things, great things, negative things. People are entitled to have their opinions, but what matters most is how I feel about me, because that’s what’s going to permeate the room I’m sitting in.”