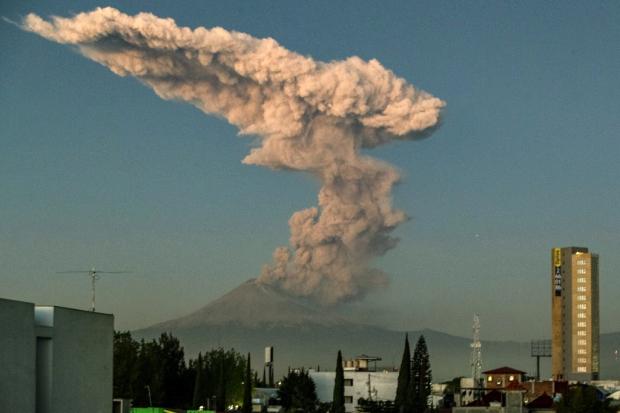 The Popocatepetl Volcano spews ash and smoke as seen from Puebla, central Mexico, on Jan. 9, 2020. (Photo by CARLOS SANCHEZ / AFP)

MEXICO CITY, Mexico — Mexico’s Popocatepetl volcano dramatically spewed a fiery cloud of ash and rock into the sky Thursday, though it did not prompt authorities to raise their eruption alert level.

“Popo,” as the volcano is known, exploded early in the morning, belching “a moderate amount of ash and incandescent material” from its crater, the National Disaster Prevention Center wrote on Twitter.

The explosion created a cloud of ash that reached 3,000 meters (1.9 miles) into the air.

The authorities, however, left the volcano’s alert level at “Yellow Phase Two,” which instructs people to remain at least 12 kilometers (7.5 miles) from the crater and be prepared for a possible evacuation.

Popocatepetl, which means “smoking mountain” in the indigenous Nahuatl language, has not had a massive eruption in more than a millennium, but has shown increased activity in the past 26 years.

It is considered one of the world’s most dangerous volcanoes, because some 25 million people live within a 100-kilometer (60-mile) radius.