MANILA, Philippines — A fire broke out at the Legazpi Tower on Roxas Boulevard in Manila on Saturday afternoon, the Manila Fire Department said.

In a phone interview with INQUIRER.net, a fire officer said firefighters responded to the blaze that started on the eighth floor of the building at 5:48 p.m.

After more than 20 minutes, the fourth alarm was raised while responders were still trying to contain the blaze.

It was declared under control after almost two hours and was completely put out at 9:21 p.m.

Fire probers have yet to identify what caused the fire. 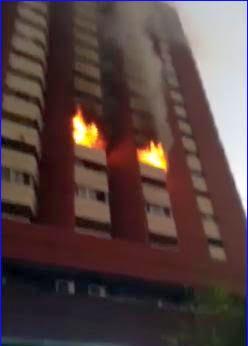 The blaze reportedly started on the fifth floor of the Legazpi Tower. (Photo from the Bureau of Fire Protection)